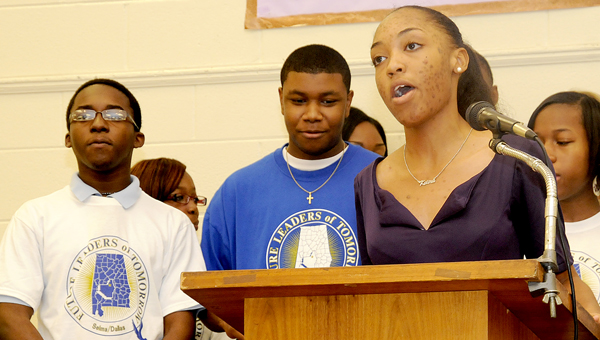 Keiera Russell leads a group of Selma-Dallas Youth Ambassadors in thanking the Selma Police Department for protecting and serving the community. -- Rick Couch

Wednesday morning, community leaders and members of the Selma-Dallas Youth Ambassadors gave special thanks to the men and women of the Selma Police Department for their service.

Members of the department were the guests of honor during the annual Thanksgiving Unity Prayer Breakfast, which offered music and skits to help lead students from around the county down the right path.

Demanda Smith, a Selma High School student and Youth Mayor, said she looks forward to the breakfast every year.

“This annual prayer breakfast is one of our most enjoyable events,” she said. “We have so much to be thankful for and so many things we take for granted. This program is so special because we have the opportunity to share our thankfulness and our prayers with one another.”

Another ambassador, Antonio Jemison, said he feels it is important to honor the men and women who serve and protect.

“I think it is great that we could have a program like this to honor our police and veterans for their service,” he said. “We are very thankful for them. It’s important for us to let them know how much we appreciate them.”

“If we didn’t have police officers, we wouldn’t have order anywhere,” she said. “Young people, if you stay on the right track, you won’t have to see them.”

The life of a police officer, Riley said, carries many emotions.

“Sometimes we do feel lonely out there because on one hand, some people want us and on the other hand, some people don’t,” he said. “We know we have a tough job. None of us come into this job to get rich, it is a job that is either for you, or it is not.”

But like the ambassadors, Riley said it is important to see the big picture when performing their daily duties.

“You carry the title of ambassadors,” he said. “An ambassador does what is right, best for the future. You can’t take that title lightly.”