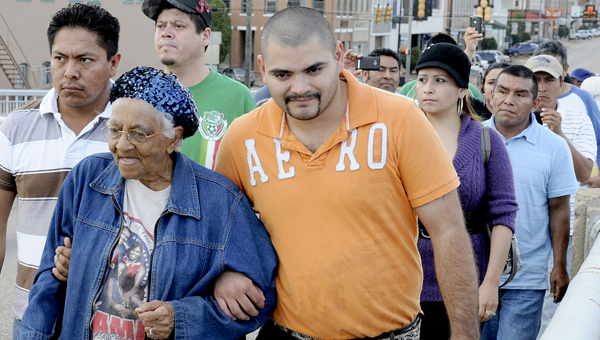 More than 50 people turned out Wednesday afternoon to march across the Edmund Pettus Bridge to draw attention to and protest Alabama’s immigration law approved by the Legislature earlier this year. -- Tim Reeves

Shouting “si se puede” (Spanish for “yes we can” or “it can be done”) and “una familia, una Alabama” while holding up a sign in its English translation: one family, one Alabama, more than 50 Latinos marched across the Edmund Pettus Bridge Wednesday in protest to Alabama’s new immigration law.

La Jefa 1500 AM, a Hispanic radio station based in Birmingham joined with members of the National Association for the Advancement of Colored People in Birmingham to create the “14 Cities, 14 Days, One Family, One Alabama” tour. The tour, which stopped in Clanton Tuesday, will continue in Prattville Thursday.

Johnson said the rally was important for all persons — black, brown, red or yellow.

“Jim Crow is dead but his cousins are still living,” Johnson said. “We cannot give up, we cannot give in. All of us, black and brown.”

For two radio personalities, Jose Antonio Castro and Orlando Rosa, adding Selma to the tour list was important to draw comparison to the group’s efforts to battle what they believe to be an oppressive immigration law to the civil rights struggle of the 1960s.

“I’m a U.S. citizen of Puerto Rican descent, yet, because of HB 56 (the bill name and number of Alabama’s new immigration law) and because I ‘look Hispanic,’ my civil rights are at risk,” Rosa said.

Roberto Soldevilla, who moved to Selma seven years ago from Kansas, has three sons who currently live in Selma and who also participated in Wednesday’s rally. Soldevilla believes the bill is unfair.

“I feel really bad about it because most of the people here are coming to work,” Soldevilla said. “We’re not trying to hurt anybody, we’re trying to work. Everybody in this county has been an immigrant – people forget. We live in Alabama and we love our state and we want it to be better.”

Soldevilla, who says he loves living in Alabama, said he pays taxes like everyone else and should be treated like a citizen.

“We’re still paying taxes … every time we go to the store, we’re paying tax,” Soldevilla said. “We want to contribute to our state. I recognize if people are doing wrong they should be sent back to their country, but if people are trying to make something better (of themselves) than they should be able to do it.”

Joel Rivera of Birmingham made a special stop in Selma for Wednesday’s march.

“It’s bad … for us, it’s bad,” Rivera said. “We hope this will bring awareness. We’re trying to walk across the bridge like they did in the 1960s.”

Young mom Vianey Garcia, 18, said she fears for her 2-and-1/2 year old baby. She feels as though the government should punish all criminals, not solely those of Hispanic descent.

“She was born here and it’s hard for everybody,” Garcia said of her daughter. “I’m scared to go out and get my phone or pay my bill … scared to drive out for her food or diapers — just the simple things. I feel it’s (the bill) is wrong. They’re just picking us, and we haven’t done anything wrong. Laws like this shouldn’t have been done.”

The tour will continue Thursday in Prattville and then move on to Wetumpka on Friday and Montgomery on Saturday.

Keiera Russell leads a group of Selma-Dallas Youth Ambassadors in thanking the Selma Police Department for protecting and serving the... read more