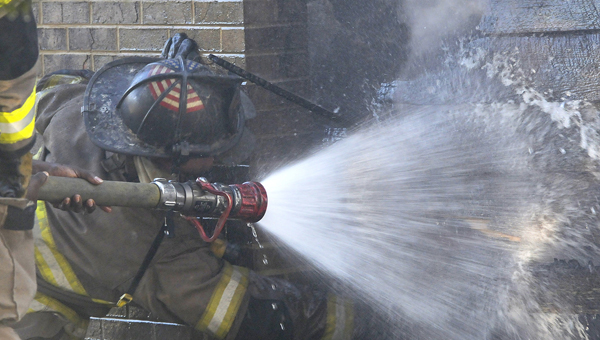 Firefighters were able to contain a Saturday afternoon fire at The Cedars before the flames could spread. The building was destroyed. The cause of the fire remains under investigation. -- Tim Reeves

A Saturday afternoon fire that destroyed a Selma apartment complex remained under investigation as of Monday.

The fire, which ignited off Citizens Parkway, lit up the sky and filled a large portion of Selma with smoke.

Selma Assistant Fire Chief Mark Walker said the department is still working with the state Fire Marshall’s Office to determine the cause of the fire.

“It’s still under investigation, and we are waiting on the state Fire Marshall,” he said. “We are hoping he is going to come in (Monday) or one of the next few days to look at it.”

Flames erupted from The Cedars apartments shortly after 3:30 p.m. drawing response from several units of the Selma Fire Department, multiple police cruisers and an ambulance.

Though the cause of the fire was not known at press time, resident Donna Morgan said the inferno could have resulted from a cigarette.

“From what we have heard, someone was smoking and left the cigarette on the deck area,” she said. “The cigarette wasn’t out all the way, and it caught a plastic chair on fire. The chair caught the deck on fire and it hit a gas line.”

An hour after the fire began, firefighters were still on the scene trying to extinguish the flames of a gas line that was feeding the fire.

The department seemed to have the gas line at bay by 4:30 p.m.

The building appeared to be a total loss.

No one was believed to have been in the apartments at the time of the fire and no injuries have been reported.

Concordia ends with a win