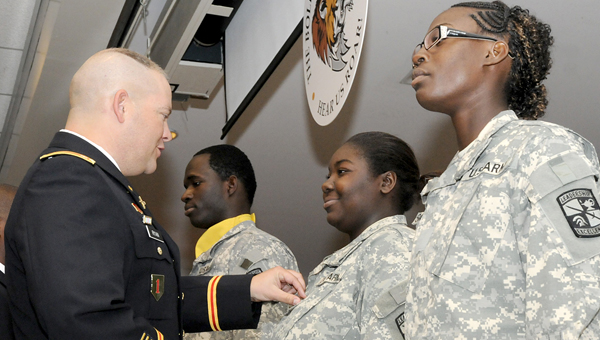 Several Concordia College ROTC cadets and members of the community were honored Thursday for their accomplishments and support of the program.

During the ceremony, which drew a packed house, many cadets had ranks conferred and were recognized for their accomplishments. They were also issued a challenge to continue to push forward to make the program great.

The program, Lt. Col. Sean Ryan said, is young. But, he said they have grown to 28 members and become a force to be reckoned with in that short period.

“The entire program deserves a lot of awards,” he said. “We’ll have been here two years in December, so it has been a very short time. From pure numbers and the quality of the cadets we have here, I couldn’t be happier with what they have accomplished. It keeps on getting bigger, and it keeps on getting better.”

The program, Ryan said, has always been quick to respond when needed, which they proved following the April 27 tornadoes in Tuscaloosa. The unit logged 160 volunteer hours in helping with cleanup and recovery efforts.

Selma Mayor George Evans said the Concordia ROTC program has also been instrumental in events within the city. He reflected on the program’s beginnings and where they are today.

“Not too along ago, we stood here for the inception of this program,” he said. “I want to commend the cadets on all the volunteer service you have taken part in to help us in so many, many things to make possible in the city.”

The guest speaker for the ceremony, District 67 Melton Rep. Darrio Melton, said he appreciates the sacrifices made by members of the ROTC program and their commitment to serving the community and country.

“Soldiers have a special place in my heart, because soldiers, for me, are dream protectors,” he said. “People keep wondering what is going to happen to America. I’m not concerned, because when I look out at this audience today, I see dream protectors.”

The decision to join the military, Melton said, is not always an easy one.

“I know a lot of parents wonder why you would get involved in the military,” he said. “There is something inside of you that says ‘I love this country and our ability to live out our dreams.’ That says something about you as great leaders.”

The dedication of the cadets, Melton said, is commendable.

“You are faithful to the mission,” he said. “Many people throw in the towel, but you said you are going to stay there until the end. You’re not concerned about name recognition, you are concerned about what is best for all of us.”