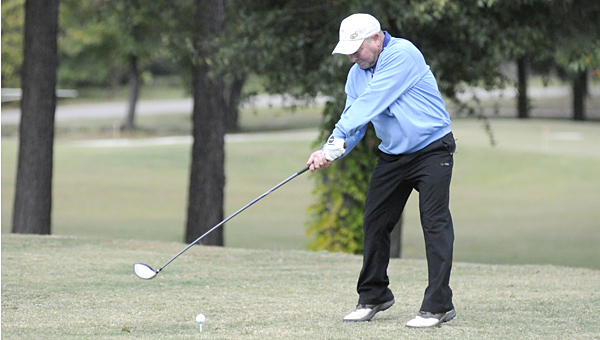 Jimmy Robitaille tees off at Valley Grande Golf Course Wednesday. Robitaille was one of 100 golfers who participated in the Selma-Dallas County Chamber of Commerce's Golf Tournament. -- Robert Hudson

Gusting winds and chilly weather didn’t stop local businesses and citizens alike from hitting the green to help raise some green for the good of the county.

“It’s awesome,” Smedley said. “This is my third tournament, and this is the biggest turnout so far. It’s real exciting.”

With 100 players making up 25 four-man teams representing local businesses, tournament chairman Lee Calame also said the tournament had its biggest turnout so far, and added it was a very successful event.

“We had more participation this year than we’ve had in the past two years,” Calame said. “We had a total of 100 players participate this year. It was a tremendous success.”

Smedley said the tournament plays a vital role to the chamber and it’s annual operations.

“This is the only fundraiser that the chamber actually has, so all of this goes toward funding and supporting our businesses throughout the community,” Smedley said. “We’re a voice for the business community, so this enables us to continue to promote our business community and have workshops and seminars to keep them informed on issues and ideas, and upcoming things in our community.”

Calame said the participants were able to overcome the cool, windy conditions and enjoy themselves.

“I think it all turned out very well outside of it being very windy and a little cool,” Calame said. “We had a great turnout and I think everyone had a wonderful time.”