‘Thank you for saving my life’ 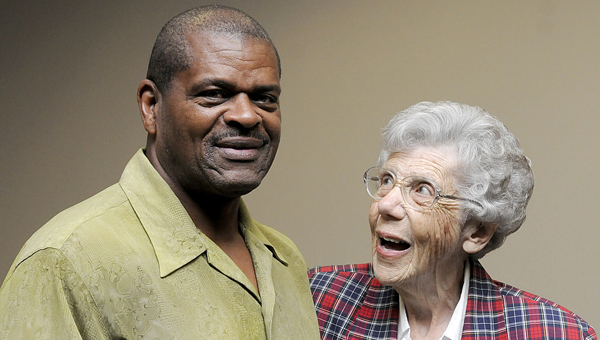 Covering his head and sobbing as he heard the words of his book read aloud, Johnny Bodley was overcome with emotion as he sat in front of his childhood hero, retired social worker Jean Kyser, Tuesday. This is the first time the Selma native and Kyser have seen each other in nearly 50 years.

“I would’ve died years ago if you hadn’t taken me out of Selma,” Bodley said to Kyser, his face still damp from the tears. “Not just me, but my sisters — you saved them too … thank you for saving my life.”

As a young boy in 1960s Selma, Bodley was a deviant youth deemed by many as a “Po’ Bad Boy.” Arrested before he was a preteen, Bodley was thrown in jail for the first time at age 8.

“I was doing everything that would kill a person,” Bodley said. “Mrs. Kyser was there for me and stayed in my life, (but) I just kept being bad and getting away. It’s hard to find people like Mrs. Kyser.”

Bodley first met the Dallas County social worker around 1962. Working in the county for 16 years, Kyser said Bodley and his siblings were one of the first children she worked with. At age 9, Bodley was placed with a foster family in Safford who would point him to a better life.

Turning his life around in his 20s, the accomplished self-taught musician set out on a journey to find Kyser, whom he thought died years earlier. Fate, on the other hand, had something else in store.

Bodley, a regular at the Larry D. Striplin Performing Arts Center, would often practice the piano there. The music got the attention of public buildings facilitator, Kay Jones.

“Two weeks ago, he told me he was from Safford and I told him my husband was from there,” Jones said. “He knew my father-in-law, who owned a cash store. He wanted to find relatives of Kyser; we thought she was deceased.”

Jones said she later did research at the Selma-Dallas County Public Library to find out more about Kyser. A library employee said she knew Kyser, who frequently checked out books, and her son. Jones was flabbergasted — she couldn’t believe her ears!

Jones later connected Bodley with Kyser through a telephone call.

“The moment I heard her voice, I knew it was her,” Bodley said. “I never forgot her.”

Now in her 90s, Kyser was speechless at Bodley’s words of gratitude inside the library Tuesday.

“This is more than I expected,” said an overwhelmed Kyser. “It’s amazing … it makes you feel like you’ve done something worthwhile. I’m overwhelmed.”

With the success of his biography “These Eyes,” a tribute to Kyser, and as a longtime outreach worker and HIV and AIDS prevention specialist in Tuscaloosa, Bodley credits his achievements to Kyser.

“I connected with you and I can’t thank you enough,” Bodley said, his smile aglow.

The library will feature Bodley and his book in February.