Wallace has tough night at home 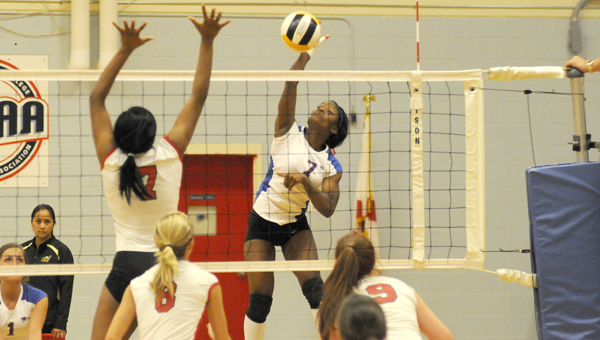 Above, Ebony Gary prepares to spike the ball for a point in the Lady Patriots’ final home game of the regular season against Gadsden State Community College. -- Robert Hudson

“You just have to stay positive because the momentum of the game will change, and you just have to keep playing,” Harper said. “We didn’t do that tonight. You can’t give up.”

Gadsden came out the gate strong, as they got off to a 6-2 lead in the first set.

That strong start would foreshadow the result of the first set, as Gadsden maintained the lead the entire set and would win 25-17.

Wallace would threaten in the second set after getting down early, as the Lady Patriots would tie the set at 13-13.

The Lady Patriots would take their first lead of the set and match at 14-13.

Gadsden would carry over the momentum from the second set, as they maintained the lead for the entire third set winning 25-19.

The Lady Patriots still have something to look forward to as they’ll prepare to play in the Alabama Community College Conference playoffs for the first time in program history.

Harper said her team will have to work harder if it hopes to win.

“We just have to keep pushing,” Harper said. “With two weeks before the tournament, we’ve got to get in here and practice. Hustle and heart, that’s the only thing that’s going to help us win and help us get over the hump.”