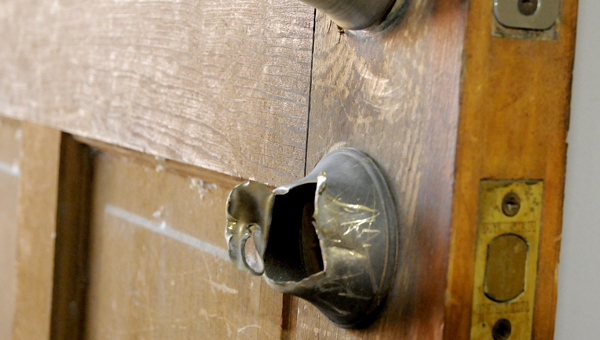 A deadbolt lock on the back door of the Old Depot Museum remains in pieces after burglars broke into the museum early Sunday morning. -- Rick Couch

Though no items were stolen from the Old Depot Museum during a Sunday burglary, a minimum of $600 in damage was left behind, which will impact the museum’s budget.

A deadbolt lock on the back door of the museum was completely destroyed and extensive damage was left on a nearby window as well.  The break-in was the second at the museum in four months.

Museum curator and director Jean Martin said she received a call Sunday alerting her of an activated alarm.

“They called me at home and it was just about 3:15 and the first call came from the communications company telling us the alarm was going off,” she said. “They apparently didn’t get anything.”

“The city has been working on Water Avenue and it’s really looking good,” she said. “The park is going to be just wonderful and it will come across and join us. But if people are going to do things like this, nobody is going to come.”

The museum strengthened its security system in May after a Feb. 21 break-in of the fire engine house in which more than $40,000 worth of artifacts dating back to the 1800s.

The items were never recovered.

Lowndes County native Wilma Thomas has been a volunteer with Vaughan Regional Medical Center since 2003. As a retired teacher... read more