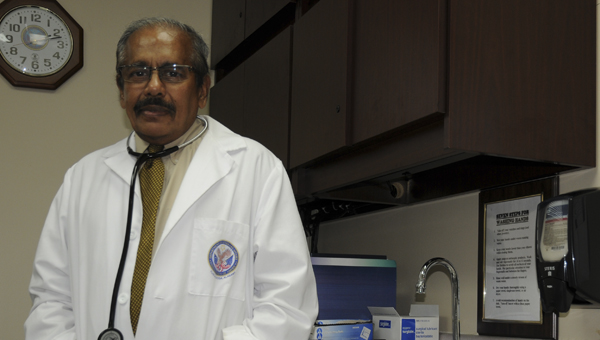 After more than 30 years in Selma, Dr. S.K. Das will head to Wyoming to continue his work with the VA. -- Rick Couch

For more than 30 years, Dr. S.K. Das has been a part of the Dallas County Community. But last week, his time in Selma came to a close at the Selma Outpatient Clinic, which is associated with the Tuscaloosa VA Medical Center.

After conducting a private practice for 30 years, Das said he decided to work with the upstart clinic because he felt it was a great way to serve the community.

“I thought it would be a good opportunity to work in an outpatient setting and to set up this clinic,” he said. “I’ve been very proud of what we’ve done here. The staff has been very helpful and cordial. I’ve really enjoyed working here.”

The staff, Das said, has been a very efficient team, which, in turn, led to happy patients.

“Many veterans have talked to me about how much the clinic has helped and how good the staff is,” he said. “They have a very high opinion of the staff here.”

VA Clinic Licensed Social Worker Brenda McCary, who has worked with Das from the start, said he has been a wonderful addition.

One of the biggest assets of having Das on board, McCary said, is his familiarity with the community.

“For a lot of our veterans, it has been very comforting for them because he practiced in the community for 30 years,” she said. “For them to see a familiar face, I think made a huge difference. He has been an asset for our community and for its citizens, and we know that our veterans are going to miss him.”

Leaving, Das said, will be tough because so many of the employees have become close friends.

“They have been like my family,” he said. “I will miss them very much.”

Das will continue to serve the VA at its Cheyenne, Wy. clinic. Das is making the move to Big Sky country to be closer to his daughter, who also practices medicine in Wyoming as well.

“It’s bittersweet,” McCary said. “We hate to lose him, but we’re happy he will be with family.”