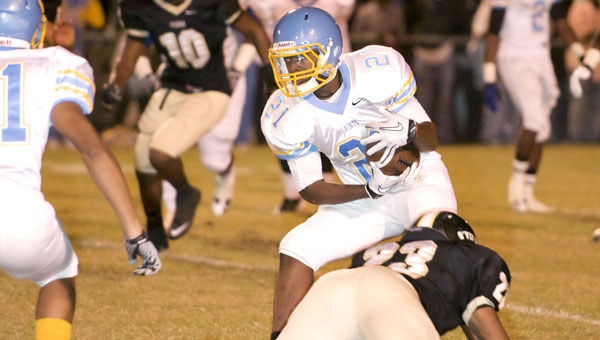 All Greenville High School head coach Earnest Hill could do was smile.

He had a good reason.

The first-year head coach had just watched his Tigers rout Class 5A, Region 3 rival Selma High School 35-7 for a homecoming win. In the process, the Tigers claimed the region crown and locked up home-field advantage for the first round of the playoffs.

“I’m very proud of these guys,” Hill said. “We have one more region game up at Brookwood. If we can win that one we’ll be undefeated in the region. It’s going to be tough. Those boys are playing pretty good.”

Greenville (7-1, 6-0 Class 5A, Region 3) made it look easy Friday night. The Tigers scored on four of their first five possessions and held Selma (3-5, 2-4 Class 5A, Region 3) to just two first downs in the first half to carry a 28-0 lead into the intermission.

The Tigers dominated the first-half time of possession holding the ball for 15:48, while rushing for four touchdowns.

Greenville senior running back Jamall Hamilton scored on runs of 16 and 4 yards, sophomore running back Donta Lee scored from 7 yards out and junior quarterback Kent Riley scored on a 1-yard plunge in the first half.

Greenville’s final score was set up by a fumble recovery by senior defensive lineman Larry Heartsill with 7:16 remaining in the game. Freshman quarterback Jerome Watkins punched it in from 8 yards out for the score. Junior kicker Ozell Carter booted his fifth point after attempt of the night to cap the scoring.

“We came out flat in the second half,” Hill said. “I’ve said from day one that we are not good enough to do that. We’ve got to start playing hard for the entire game, but like I said, I’m proud of these guys.”

Greenville will be back in action Friday night when it hits the road for a showdown with Brookwood. Kickoff is set for 7 p.m.