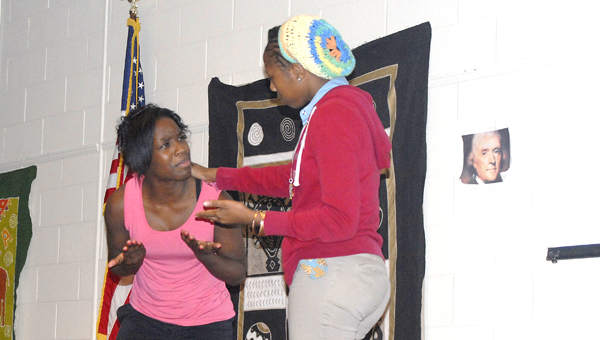 Ninth graders Askhari Little and Tyesha Turner act out their parts in the play “The Teacher,” during the African Extravaganza held Friday at the Carl C. Morgan Convention Center. The play, written by Faya Rose Toure, was the final play after 40 years. -- Desiree Taylor

Toure performed her play titled “The Teacher” with local students at the annual event, which also featured authentic food, musical performances and monologues.

Toure, who played the role of the teacher, used the crowd as her interactive classroom, showing students and visitors the importance of knowing their self-worth and their origin.

“When you do something for 40 years … all issues affecting your people — child abuse, miseducation, or tracking … it takes a lot of energy and commitment,” said the attorney who has always had a love for teaching. “I don’t have the energy anymore; I’ll continue to work with children.”

Sponsored by the Black Belt Human Resource Development Center and the Black Belt Arts and Culture Center, all proceeds from the event will go towards keeping the McRae Learning Center, a vision of Toure’s mother, open. Toure said the school is a testament to the many successful doctors, lawyers and athletes who’ve attended the school in their youth.

“It’s so stressful (but) failure is not an option,” Toure said. “I’m hoping someone will come up and show leadership. This is my mother’s heart and we can’t allow the school to die.”

As hundreds filled the Carl C. Morgan Convention Center Friday, members of the crowd felt the program was beneficial.

“This is a positive outlet for kids — it’s something constructive for them to do in their time off,” said Selma resident Theresa Shanks. “It’s interesting.”

“It’s something positive for the community,” Watts said.

Selma resident Vandora Scott said she admires what Toure has done in the community.

“It’s great to see the kids having an outlet to express themselves,” Scott said.

The event also had custom made jewelry, books and African dress for sale.