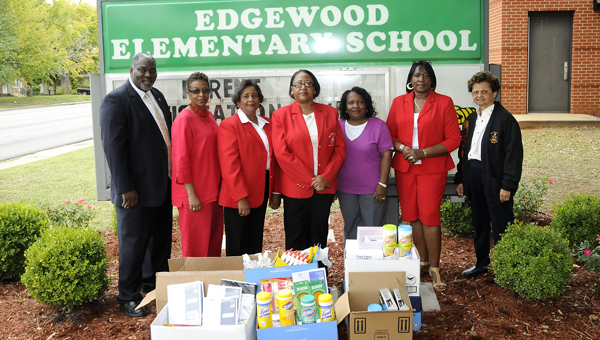 The chapter’s educational development committee chose Edgewood as its school to help out for the 2011-2012 academic year.

Harris said this is only the beginning of the sorority’s efforts to help out Edgewood Elementary.

“We’ll be coming back throughout the year,” Harris said. “We realize there’s a valuable need to assist schools.”

“We feel blessed to receive the gift from the sorority because they could have chosen any other school, but this year they decided to choose Edgewood and we feel like it’s a great honor to receive some assistance from them because we do need it,” Peterson said. “Right now schools across the nation are at the point where they have to conserve resources and utilize every means possible to make sure they have all the necessary resources to keep their schools operating at an optimal level but with fewer funds to do so.”

The Delta Sigma Theta Sorority, Inc. is a private, nonprofit organization whose stated purpose is to provide assistance and support through established programs in local communities throughout the world.

Founded in 1913 at Howard University, the sorority is made of more than 200,000 predominately black college educated women and has over 900 chapters in the United States and around the world.

After a big road win over Hooper Academy Friday night, Parker Hughes and the Morgan Academy Senators are headed to... read more