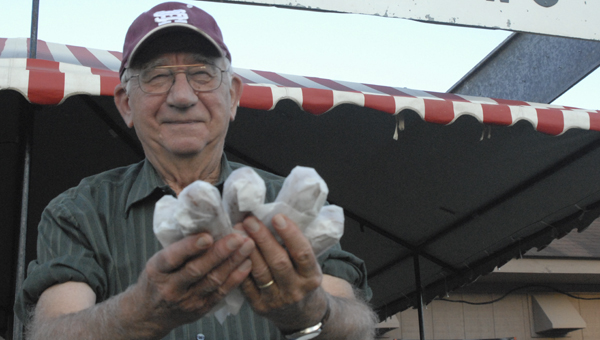 Through the years Gene Middlebrooks has become an institution at the cozy dog booth at the Central Alabama Fair. He has been helping the Civitan Club sell the dogs for almost 20 years. -- Rick Couch

His voice is synonymous with the Central Alabama Fair. Whether he is calling you in, or calling you out, almost everyone that passes through the fairground gates in October has interacted with Gene Middlebrooks, affectionately known in Dallas County as “the cozy dog man.”

He can usually be heard belting out his familiar “Come on and get your cozy dog!” Between his appeal, and the flavor of the product, few can resist.

Middlebrooks said he has been helping the Selma Civitan Club peddle the cozy dog for almost 20 years.

Though the sales and production of the dogs is a team effort, his signature sales style is all his own.

“I grew up in the country around Sprott and I got to listening to Jerry Clower,” he said.

“I’ve got all of his old records. I could sit and listen to him because I did a lot of the same things as him when I was a kid, hunting and all that stuff. I’ve also always had a slow talk and I just started saying it like him.”

Through the years, Middlebrooks has become something of a local celebrity for a style which he said began as a personal challenge.

“I know a lot of the people who come down through here,” he said.

“I just talk to them. It became a challenge to me really to sell them late at night when folks were going home, so I started teasing people going out the gate to get them to come back.”

Though it is hard to imagine a time of cozy dogs without Middlebrooks, Civitan member Gerald Anderson said the snacks have been around for several decades.

“In the 1950s they had the fair close to Bloch Park and when we started selling cozy dogs it was just a little tent, and that’s where we started it out.”

But it was Middlebrooks, who joined the club in the 1970s, who continued to give the cozy dog personality.

Each year, Middlebrooks said he has introduced more and more children to the cozy dog. One story in particular, he said, stands out.

“We had a little kid last year that was with his mother and grandmother, and he was just a lap baby,” he said.

“I started teasing his mama about getting that baby started out with a cozy dog and she did.”

Talking to the new generation of cozy dog eater, Middlebrooks said, is something he really enjoys.

“I love children and when children come in I like to tease them and their moms and dads,” he said.

Recently, Middlebrooks said parents have started taking pictures of him with their children as they eat their first cozy dog.

Though his role with the club at the Central Alabama Fair is a labor of love and mostly for fun, Middlebrooks said the end result it helps a very serious cause.

“It’s a challenge for us to sell as many as we can because the money funds the projects we do, primarily the distinguished young women,” he said.

“This helps us raise the scholarship money we give.”

When asked how long he plans to continue, Middlebrooks said “as long as they want me too I guess.”