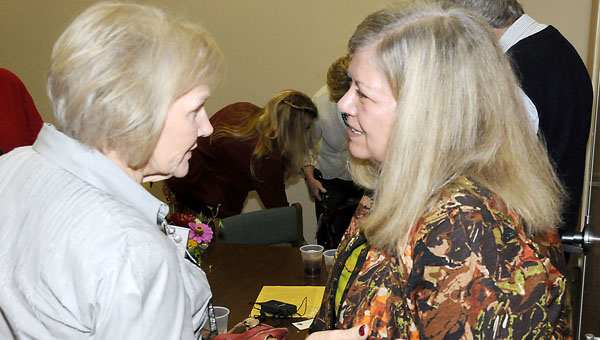 Bill Nickles greets Dilcy Windham Hilley, daughter of Kathryn Tucker Windham, during Thursday’s Lunch at the Library. Windham read from her mother’s last book “She” to a crowd of eager listeners during the event. -- Rick Couch

The standing room only crowd at the Selma-Dallas County Public Library left no doubt Thursday as to how special Kathryn Tucker Windham was to the community.

People from all over gathered at the library to celebrate the release of Windham’s final book, “She.”

The book highlights the ongoing struggle between Windham and her aging alter-ego she refers to as “she.”

The book, library director Becky Nichols said, was reflective of many of her works.

“Many of the stories she told are so simple, they are just about doing the next right thing,” she said. “They are just about life and love. They weren’t big. That’s what we liked best about them. Clearly we’ve been touched by this tremendous life.”

As the eager crowd finished their meals and settled in, Windham’s daughter Dilcy Windham Hilley, read an excerpt from the book. The opportunity to help introduce her mother’s latest work to Dallas County, she said, was a wonderful opportunity.

“It just feels like coming home,” she said. “A lot of these people helped raise me and I went to high school with them. They all feel like family. It’s just a room full of love here.”

The crowd, she said, was a reflection of her mother’s affection for Dallas County and the mutual respect that existed.

“She loved everybody, and everybody was so good to her all the time,” she said. “She had a heart full of love, especially for her Selma friends, and people all over the world.”

“I’ve been Kathryn’s editor since the mid 1990s  and when I first got to know her I thought I had a special relationship with her,” he said.

“But as I got to know her, I started to realize that I didn’t really have that special relationship because she loved everybody. She was a special woman and it was a privilege to work with her.”

Williams, who has edited and published about 500 books, said he always looked forward to working with Windham.

“Kathryn was special among the authors I’ve worked with,” he said.

Through the years, Nichols said, Windham taught people a number of valuable lessons through her works. One in particular, she said, has remained with her for many years.

“I think the greatest gift she gave was to be yourself, not to try to jump through somebody else’s hoop,” she said. “Just be who God has called you to be. Live into that identity.

“I think if there was a gift Kathryn Tucker Windham brought us all it was that.”

Hornets, Panthers battle for win No. 1

By Robert Hudson The Selma Times-Journal When the Dallas County Hornets and Southside Panthers meet on the gridiron Friday night,... read more