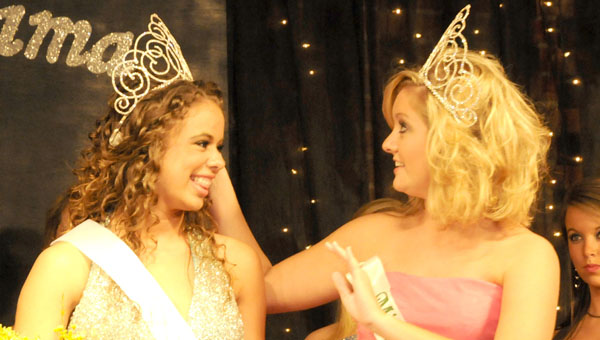 Slowly but surely the contestants were narrowed down Tuesday night during the Miss Central Alabama Fair pageant. When the last name was called, it was Dallas County High School student Taylour Talbot who was left to wear the crown.

When her name was called, Talbot said she was surprised.

“All I could think of was how excited I was,” she said. “I’ve only been in a couple of pageants and I had placed first and second, but I have never won.”

“It’s very exciting,” she said. “I think I’d like to keep competing.”

Other winners were Caitlin Autrey for Miss Photogenic and First Runner Up, Shelby Moore for Miss Congeniality and Gilley Yelverton as Second Runner Up. Other Top 8 finishers were  Carol Boswell, Morgan Smith, Laura Tidmore and Jordan Parnell. The Tiny and Little Miss pageants will be held Saturday.

Ellwood Christian Academy’s Denzel Smiley looks for running room in a game against Sparta Academy earlier in the season. The... read more