Backed up and fed up 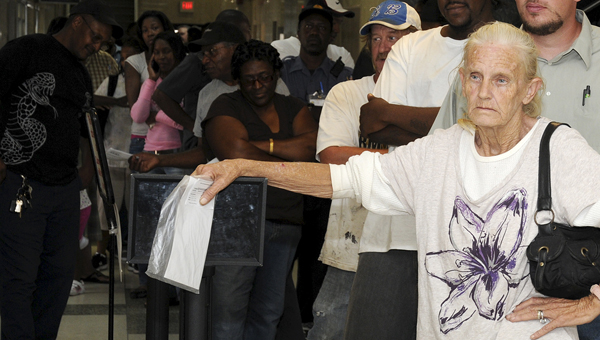 Linda Freeman waits to renew her tag Friday at the Dallas County Courthouse. Because of new requirements from Alabama’s immigration laws, the tag division’s staff has been put under a tremendous strain. -- Rick Couch

What is considered one of the toughest immigration laws in the nation is creating an even tougher situation for those working in local tag offices.

U.S. District Judge Sharon Blackburn wrote Wednesday in a 115-page opinion finding some parts of the law that conflict with federal statutes, but others that don’t. Left standing at least temporarily are several key elements that help make the Alabama law stricter than similar laws passed in Arizona, Utah, Indiana and Georgia. Other federal judges already have blocked all or parts of those.

One element of the law requires everyone applying for or renewing a license plate to provide proof they are in the country legally. This addition has created problems with online renewals and renewals through the mail, which Probate Judge Kim Ballard said will put a strain on the courthouse staff and the patience of the public. Problems with a scanner designed to determine the validity of licenses has also created some issues.

“We try to inform everybody we can, but sometimes you will get people who stand in line with their renewal cards and get up there and find out they have to have their drivers license,” he said. “There are also some people who we know have a valid license, but it won’t go through the scanner. There are still some bugs to work out.”

Another problem, Ballard said, comes with those who are not aware of the new requirements and mail in their payments. If not submitted properly, Ballard said the payment must be returned. It becomes an even bigger problem if the money has to be returned and the citizens can’t get to the courthouse before they are considered late.

Change, Ballard said, is always tough. Though some of the new regulations will cause frustration, he said county officials will continue to work through the problems.

“It is causing some frustration, but it is the law and we are going to comply with the law,” he said. “We’ll work through it.”

Neighboring counties, Autauga, Chilton and Montgomery,  are also  starting to issue a new kind of drivers license and non-driver ID that requires more types of identification to obtain, but will make access to airports and federal facilities easier.

“It makes their license very similar to a passport,” Gov. Robert Bentley said at a ceremony Thursday where he unveiled the new documents with officials from the Department of Public Safety.

Chapman said Alabama’s regular driver’s licenses and non-driver IDs will be accepted for official federal purposes until Dec. 1, 2014. Starting that day, individuals born after Dec. 1, 1964, will be required to have a document that complies with the federal REAL ID law to board a domestic flight or enter federal facilities that require identification. Alabama’s STAR ID will do that, he said.

Chapman said once the REAL ID law takes effect, people boarding planes and entering federal facilities who use one of Alabama’s traditional driver’s licenses will have to provide a second form of identification, such as a passport. That’s why a STAR I.D. will speed access for people who regularly fly or enter federal installations.

— The Associated Press contributed to this report.

Morgan Academy defenders move in to stop an EMCA runner. The win has Morgan one step closer to the playoffs.... read more