Students learn about a good cause 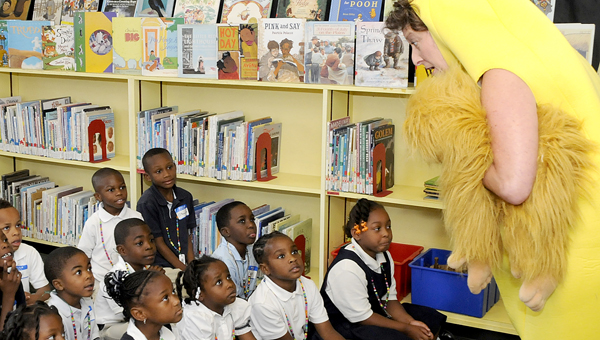 The visit was part of a collaborative effort by Selma resident Cindy Duck and Bowie, who handed out Golden Flake snacks and pencils to the students. Duck, whose 7-year-old cousin Fuller Goldsmith has been battling leukemia since he was 3, said she has been working with Bowie to encourage students to live healthy lives and help those who are not in great health by purchasing local products.

“There are companies like Milo’s, Golden Flake and lots of others who donate a certain amount of their money to cancer research,” she said. “A lot of people don’t know that, so we are trying to get the word out.”

Duck said she is working alongside a program called “Buy Alabama’s Best” which is a campaign in Alabama with the Department of Agriculture and industries as well as the Alabama Manufacturer’s and Produce Association and the Alabama Grocer’s campaign, who want to promote Alabama companies and products.

During September, a portion of sales purchased from various Alabama products will be donated to support the Children’s Hospital of Alabama in Birmingham.

“Buying local products and helping the local economy through the food industry is big business in Alabama,” Duck said. “In fact, products made in our state help pump about $2 billion a year into the state’s economy. According to a recent report, one in four of Alabama’s jobs are somehow tied to the food industry.”

A complete list of the various products that will contribute portions of their sales can be found at www.buyalabamasbest.com.

Duck said she encourages everyone to participate in the campaign so other children might have a fighting chance against the disease.

“Fuller has had to miss so much school and so many other things,” she said. “It’s important that we all do something to help.

“A lot of times people think there is nothing they can do, and there is no way they can raise millions of dollars. But every little bit helps. Everything people can do can help.”