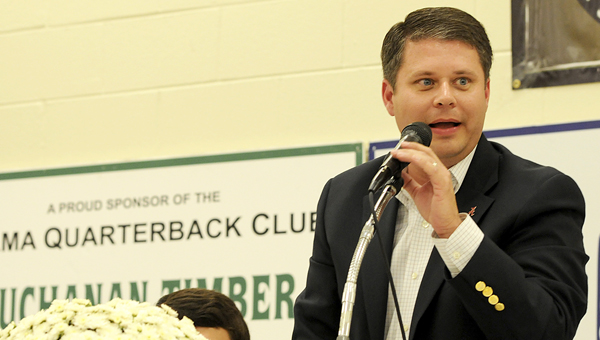 University of Alabama sideline reporter and baseball and basketball announcer and host of the Nick Saban Show Chris Stewart was on hand Monday to discuss the 2011 Crimson Tide football season and some of his favorite moments from behind the microphone.

Coming to Selma, Stewart said, is an honor because of the rich sports history.

The visit, Stewart said, was his first trip back to the Queen City of the Black Belt since winning the B-division of the Selma Country Club’s Junior gof tournament in the mid-80’s.

Stewart said people often ask him if Alabama head coach Nick Saban is as intense in person as he is on the sideline. The answer, Stewart said, is yes.

“He is every bit as focused as you hear,” he said. “He is locked in on what he needs to do at the moment.”

As the Crimson Tide readies for a trip to Gainesville, Stewart said the team has the talent to win, but better be at the top of their game.

“There are teams that you can sometimes be at your worst and still beat, in 2009 that happened with Tennessee,” he said. “Last season, Alabama started slow against South Carolina and Spurrier said it was probably the best game they have played since he has been there. They gave us a pretty good beating. That can happen at Florida … ”

Terry Jones, a mason with Xcel Masonry, lays a brick at the new Selma High School. Over 600,000 bricks are... read more