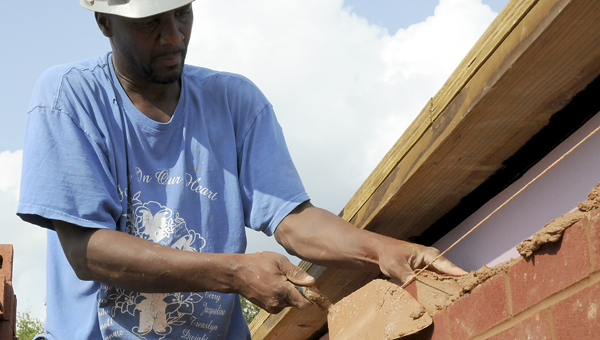 Terry Jones, a mason with Xcel Masonry, lays a brick at the new Selma High School. Over 600,000 bricks are being used in the construction of the school, all of which are from Henry Brick. -- Robert Hudson

Henry Brick is one local company contributing to the building of the new high school.

The company is providing all the bricks necessary for building the school.

“There are right at 600,000 bricks being used,” said Jim Cothran, vice president of sales and development for Henry Brick. “We were able to sell brick at a lower price to the school, and I was glad to see that Selma High was a leader in the state at using Alabama manufacturers for their products. In a tough economy, it’s nice to see the school system … using state resources as opposed to going out of state.”

“It’s very important that the local community benefits from this project,” Mathiews said. “There are many businesses throughout the city and region that are benefiting from this project. Henry Brick is probably the most visible because they have all the brick on the project. There are many, many others. We have a local concrete company, Cosby-Carmichael, providing all the concrete.”

Mathiews also said the project is indirectly having a positive impact on the community, due to some 150 construction workers using local restaurants, gas stations and hotels.

“This is the type of project that benefits the whole community,” Mathiews said. “There’s a lot of things that are impacting the community. It might not be directly, but indirectly it’s having a positive impact.”

No injuries in school bus accident