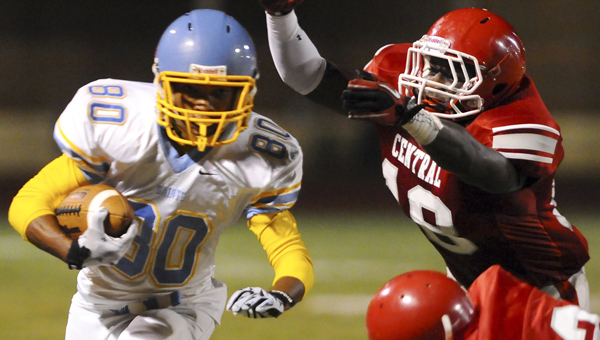 TUSCALOOSA — A missed extra point proved to be the deciding factor for the Central High School Falcons as they fell at home to the Selma High School Saints, 14-13.

“We didn’t give up,” Central coach Dennis Cooper said, “This is the first time we took the game down to the wire to a dog fight until the end. We have to take this game on into practice.”

After a scoreless first quarter, Central was poised for a 30-yard field goal attempt with 6:03 left to play until the half.

A bobble on the snap turned the drive for three into a touchdown as sophomore quarterback Vincent Davis recovered the ball to find senior Willie McNeal for a 13-yard throw for a touchdown.

The extra point by junior Keshawn Watkins was successful to put Central up 7-0.

Special teams proved to be the saving grace again for the Falcons on the following kickoff as they recovered on an accidental onside kick.

Davis completed a 12-yard pass to sophomore wide receiver DeMarcus Pippen to put the Falcons ahead.

Watkins’s extra point attempt was unsuccessful however setting the score 13-0 going into halftime.

The energy seemed to stay in Central’s favor going into the third quarter as a Central linebacker recovered a Selma fumble in Saints territory.

The Falcons drove the ball down to their red zone but were stopped as Selma’s Roderek Rice intercepted the ball. Saint quarterback Darion Alexander found Alexander Burton for a 5-yard touchdown pass to limit the score 13-7.

“There is always one play in a game that twists the ballgame in the opposite direction and that play gave (Selma) the momentum,” Cooper said.

In the fourth quarter, Alexander completed a 21-yard pass to senior Anton Summers to score. Navarious Walker sent one through the uprights for a Saints 14-13 lead.

“It hurts to be ahead the whole game to lose,” Davis said.

Pippen led the receivers with 83 yards followed by McNeal with 43 yards.