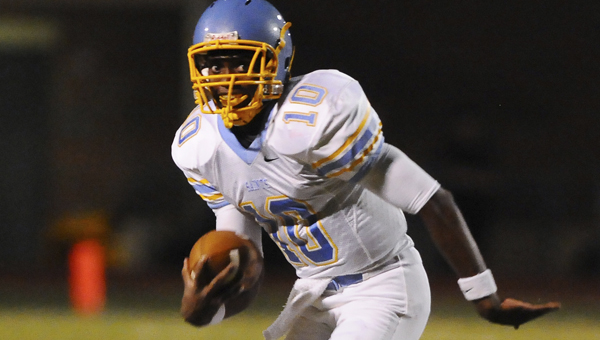 Selma quarterback Darion Alexander (10) runs the ball in the second quarter of the Central vs. Selma football game in Tuscaloosa. -- Kelly Lambert

After a come-from-behind win on the road last Friday, The Selma High School Saints football team is looking to take their momentum with them to Montgomery.

Selma head coach Leroy Miles said his team learned a lot from last week’s 14-13 win over Central-Tuscaloosa that he hopes they can carry over to Friday.

“We went into halftime down 13-0, but our guys showed a lot of character in coming back and playing hard to regain the lead and go on to win the ball game,” Miles said. “Hopefully we can continue to believe that no matter what the score is, you’ve always got a chance to win. You just can’t get too far behind.”

Miles said he also hopes his team can learn to start fast and continue at the fast paced tempo they’ve played at in previous games.

Miles also said the win last week should give his team a boost moving forward.

“I think it gives us a boost,” Miles said. “We still have to play Demopolis, Greenville, Chilton County and Brookwood. I think the kids are up and excited about the challenge. We’re just going to keep working.”

Miles said Sidney Lanier is a very tough 6A team.

“They’ve have a good football team,” Miles said. “They’ve got good athletes. It’s always going to be tough playing on that big stage in Montgomery. We’re going to go there and give it our best shot.”

Miles said the Saints will have to control the football in order to defeat the Poets.

“I think, if we can do those things, we’ll be successful.”

By Fred Guarino The Lowndes Signal In a contest marred by penalties and turnovers, the Francis Marion Rams held off... read more