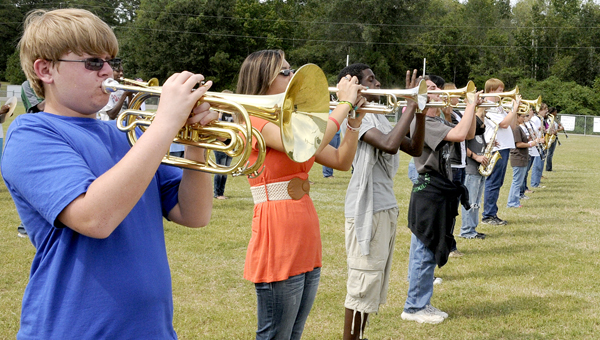 The Dallas County High band practices for one hour each day in preparation for halftime shows throughout the football season. Led by director William McDaniel and drum majors Whitney Nelson and Ashlee Deloach, the band always makes sure its music is fresh. -- Desiree Taylor

PLANTERSVILLE — Going over a halftime show routine several times early Friday afternoon, members of the Dallas County High band are no strangers to practice before a big game. And for 32 years, band director William McDaniel has been making sure students get it right.

Whether students stay one, or four years, McDaniel makes sure students are musically knowledgeable and disciplined before they leave DCHS.

“We play a variety of music from contemporary to standard,” McDaniel said. “I start looking at music in late spring — April or May and we go to marching contests and kids see things … see something they may want to use in a show. Music changes, that’s how we keep things fresh.”

“We come in … and have a band camp mostly for our freshman,” McDaniel said. “Upperclassmen come in and help with the band — the drum major and section leaders help with drills and music. During school we practice the last period of the day, which is 90 minutes. We stay two days a week afterschool.”

With a band comprised of 52 members — including dance, flag and instruments, McDaniel wants to instill in his band life lessons.

“I want them to be respectful and responsible, which is the most important thing,” McDaniel said. “If I have the opportunity to have kids for four years, they’re enjoying the opportunity … I have a greater impact on them. They’re spending a lot of their time here.”

With a combined membership of seven years, drum majors Whitney Nelson and Ashlee Deloach help keep students focused and disciplined. Both see the band as a great experience.

“You see things from a different perspective … it’s like a sky view,” Nelson said. “You’re like, ‘I’m the one directing this band.’ It’s a dream when you see everyone around you cheering; it’s an amazing feeling.”

As a clarinet player and assistant drum major last season, Deloach said the band has many positives.

“It brings discipline for you as a person, shows you how to be in a group or on a team with the individuals who play the same instruments as you,” Deloach said. “You get the experience of a cheering crowd and give them a sense that Dallas County can do this (put on a great performance). It’s an experience of a lifetime.”

A resident of Dallas County for 30 years, McDaniel attended both the University of North Alabama and Livingston University. McDaniel has a bachelor’s and master’s degree in music education.

Representatives from organizations who received grants from the Black Belt Community Foundation pose for a photograph Saturday. -- Submitted The... read more