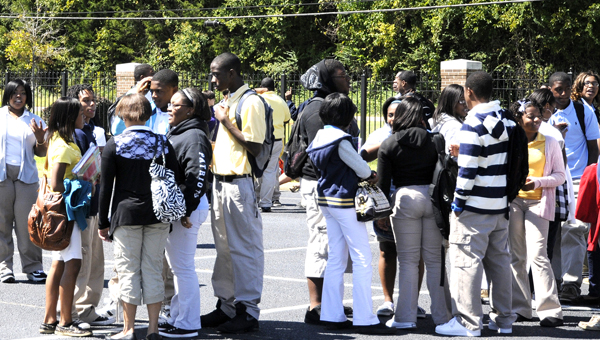 Students from Wallace Community College-Selma filtered into the parking lot when a bomb threat was called in Thursday morning. Police are now seeking informatiion on who might have made the call. -- Desiree Taylor

Hundreds of students gathered outside the Wallace Community College-Selma campus Thursday morning after students and faculty were told to evacuate various buildings due to a bomb threat on the campus.

At around 11:02 a.m., Wallace campus police received a 9-1-1 call and immediately responded to the threat. Shortly afterward, authorities informed students, faculty and staff of the threat, leaving many who lined the sidewalks, in a state of shock.

“I was working on an English paper when it happened,” said Wallace student Joyce King. “Someone said, ‘there’s a bomb threat, you have to get out’ … (there’s) nothing you can do, you can’t be upset.”

Since attending Wallace in 2010, Mercedes Scott said she was in the middle of class when she received word to move.

“I thought it was going to be a fight because I saw everyone walking,” Scott said. “They (authorities) got everyone out of the building … I wanted to go home; they’re making me think this is serious.”

Scott said this is the first time to her knowledge that she’s heard of a threat on the school. Teachers confirmed that a threat hasn’t happened in  years.

After searching the campus until around 12:45 p.m., authorities confirmed to students that all was clear and no bomb was present.

Selma Fire Chief Mike Stokes said he and his unit take threats — such as the one at Wallace, seriously.

“We first receive the call from dispatch as a code,” Stokes said. “We naturally get all units that should respond, we make contact with the communication center … we put units as close to hydrants as possible. We definitely don’t take it lightly.”

Stokes also said bomb threats on school campuses are common, and unfortunately, Stokes said, units never know when they are fake or real.

“Whenever it happens, someone is just trying to disrupt whatever’s going on through the day,” Stokes said. “The battalion chief is the first officer on the scene and will make contact with some representative of the institution to make a decision to later search. Schools can choose not to evacuate — it’s their choice … 99 percent of schools will evacuate.”

And though Stokes said the city doesn’t have a bomb squad in place, his units have standard operations in place, making sure to take care of people and property.

“We go and see if anything looks out of place,” Stokes said. “We try not to use lights or sirens to bring attention … we maintain radio sirens in the area, just in case of the real thing.”