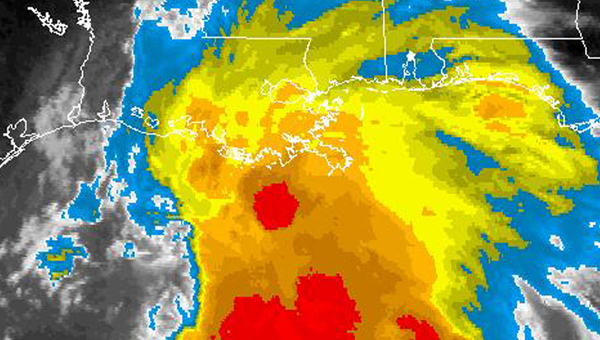 Tropical Storm Lee churns its way through the Gulf of Mexico to an eventual landing somewhere along the central Gulf Coast. Effects from the storm should be felt in the Black Belt area beginning as early as Sunday evening. -- National Hurricane Center

While the rest of the country spent the past week watching as Hurricane Irene beat and battered the East Coast, a small tropical disturbance got organized and gained strength.

Now, Tropical Storm Lee, the 13th storm of the 2011 Atlantic Hurricane season, is poised to make landfall along the central Gulf Coast and move inland, washing out much of the Labor Day weekend.

“Right now, forecasters are still not able to provide a detailed forecast of the storm’s path, but we are expected to be on the right — or wrong side — of the storm as it moves inland,” Dallas County Emergency Management Agency director Rhonda Abbott said. “Right now, all we can do is tell people to keep an eye on the storm as the next few days go along.”

According to Abbott, some forecasts have rain from the storm moving into the Dallas County area as soon as Sunday evening, but that could very well change depending on the storm’s track and speed.

“We really are expecting nothing more than some heavy rains and winds,” Abbott said Friday morning. “There is a chance for some short-lived tornadoes being spun off as it moves through the area, but our biggest concern will be the water.”

Alabama Power spokesperson Jan Ellis said the utility has been watching the development and path of Lee for the past few days and expects to have all of its crews in place in the event they are needed to re-establish power in affected areas.

“All of the crews we sent to Baltimore to help with the Irene recovery should be back in the state Saturday,” Ellis said. “Our expectation is that we will be at full strength and respond to any area that might need help.”

Thursday evening, Gov. Robert Bentley ordered the Alabama Emergency Management Agency and other state agencies to prepare for what was then a tropical depression.

“We are reaching the peak of hurricane season and it is important for Alabama residents to monitor the weather and stay informed,” Bentley said. “My office, along with our state Emergency Management Agency, will continue to monitor this storm and stand ready to respond.”

“Our crews are on call 24 hours, sevens day and we are ready to respond to anything that might develop over the next few days,” Evans said. “At this point, we are just encouraging residents to play close attention to the weather and media outlets for the latest information.”

Museum to lose another curator

Kevin Hollis, who has been curator at the National Voting Rights Museum for less than a year, recently announced he... read more