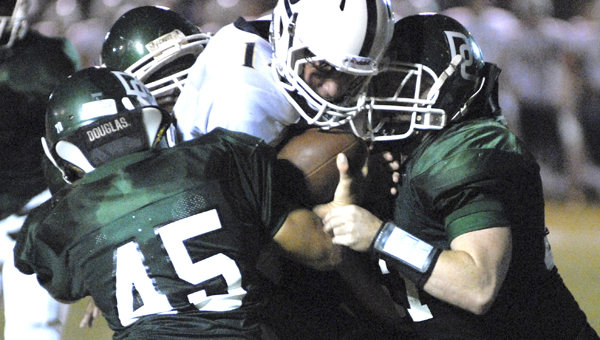 A number of Dallas County defenders move in to make a stop Friday night. -- Robert Hudson

When the Jemison High School Panthers took the field against Dallas County High School, they were on a mission, as they swatted the Hornets 57-0. Jemison head football coach Merritt Bowden said his team was focused entering the game.

“We talked all week and just tried to focus on us, on getting better as a team,” Bowden said. “Right now the guys have bought into that and continuing to play hard on every snap.”

The Panthers (2-0, 1-0) asserted their dominance right out the gate, as Edward Hubbard returned the opening kickoff 90 yards for a touchdown.

A two-point conversion put the Panthers up 8-0.

Hubbard said his team played as unit, which pushed them to victory.

“What we kept focusing on was one thing, and what we focused on is oneness. We focused on being one team, one unit.” Hubbard said. “Me being a senior, I knew that I had to lead my team. They’re going to follow me in what I do, so I lead by example and played my heart out.”

Turnovers were the name of the game for the Hornets (0-2, 1-0) as they gave the ball away five times, all fumbles. Three of those fumbles were recovered by Panthers defenders for touchdowns. Dallas County head football coach Willie Moore said Jemison was a much better team.

“We know they were a very dangerous team, they’ve got a lot of athletes, they’re a seasoned team,” Moore said. “They’re a much better football team. They’re program is in a different stage than ours is.”

Deriaun Glenn fights for yardage during the second half of the Ellwood Christian Academy Eagles’ game against South Montgomery County... read more