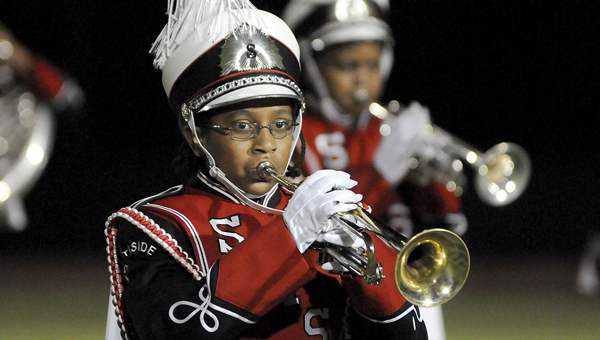 Throughout the scorching summer temperatures members of the Southside High School Marching Panther Band have continued to show dedication. The band logged many long hours in preparation for its fall halftime shows. -- Tim Reeves

Addressing his students with a white megaphone through his office window, Southside High Marching band director Michael Walker Jr. makes sure his students stay on task during their regular afternoon practices.

After facing their stiffest competition against the Selma Saints last Friday, the Marching Panthers haven’t lightened up on their three-day a week practice schedule.

“It took a lot of practice, a lot of exercise,” Walker said about the Aug. 26 game. “The first game was the biggest game of the year … we’re going to learn more music (and) we’re going to iron out things we need to work on. It’s being consistent, starting practice on time and sometimes staying a little over.”

And for students who don’t show up on time, Walker said his students hit the track and run five miles.

“A lot of students want to get out there and exercise … students want to be disciplined and structured,” Walker said. “We practice every Tuesday, Wednesday and Thursday from 3:15 p.m. to 5:30 p.m. and before opening season, (practice) lasted until 6:45 p.m., sometimes 7 p.m. The practice really helped … parents were very helpful.”

An alumnus of the Alabama State University marching band, Walker brought his experience to Southside in 2007. Currently overseeing 60 students — eighth through 12th grades, Walker said he’s pleased with the current group of boys and girls.

“By far this is the best group of students I’ve had,” Walker said. “Not only are they prepared to work, they’ll do anything I ask them to do … they know the best band will be disciplined.”

“If they can leave here … doing something for themselves … then I’m pleased,” Walker said. “That gives me happiness.”

Third-year drum major and senior Isiah Boyd said Southside’s band is how a band should be.

“The people that’s in it, the music we play, the band director — everyone gets along, it’s the perfect band,” Boyd said. “It’s been a great experience so far, people always expect greatness from Southside band and we give them what they want.”

Boyd said he is the director’s “right hand man” and a support to other members. “I lead how a drum major is supposed to lead a band,” Boyd said. “I’m the granddaddy, daddy and people come to me with their problems. If there’s a disagreement they come to me and I handle it.”

Hatfield: A lifetime of banking