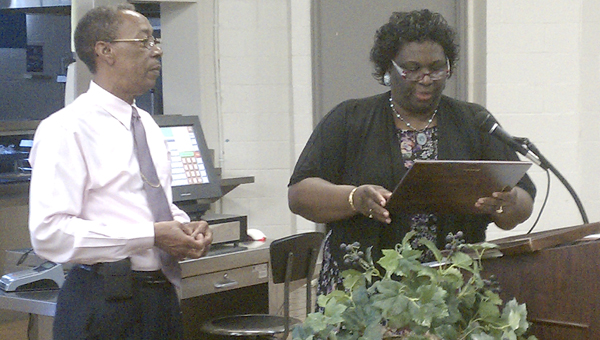 Longtime Dallas County Schools employee Finis Sanders is presented a plaque during a ceremony Monday to honor his years of service. Sanders served in many capacities for the system. -- Special photo

Having served 30 years as director of transportation for the county school system and as principal for Hazen Harrell Junior High School, Hunter Mission Elementary, Tipton-Durant and Martin Middle Schools, Dallas County School Board members honored Sanders’ hard work and dedication with a plaque during Monday’s school board meeting.

“As principal he served as an instructional leader, (he served) as a manager of students and staff and collaborated with parents and was a part of the Dallas County leadership team at large,” McKenzie said. “As director he’s helped to ensure our boys and girls arrived at school safely.”

McKenzie said though the board usually honors retirees at the end of the school year around May, this occasion, McKenzie said was rare.

“We always honor our retirees,” McKenzie said. “We appreciate the fact they’ve given service to boys and girls of Dallas County School system and the system as a whole. This (recognition) happened a little earlier.”

Sanders, who officially retired July 31, said he plans to do a lot of fishing and traveling in the months to come.

“I love to crappie fish in the spring … I could do so everyday,” Sanders said smiling. “Occasionally, when I get a chance to go to Dauphin Island in Mobile I fish for white trout. I would want to go to New York, Dallas and see the Grand Canyon. I want to go to the Bahamas.”

Born and raised in Dallas County, Sanders said it was always his plan to come back into the system and have a long career there.

“I love what I do and I enjoy the kids,” Sanders said.

“It was a joy (coming back to Hazen Harrell) because the high school basketball coach I had was still there as a teacher when I came back as an administrator. It was fun.”

Members of the Selma Quarterback Club enjoy some barbecue during the club’s kickoff event Monday evening at the home of... read more