Hornets hope to bounce back 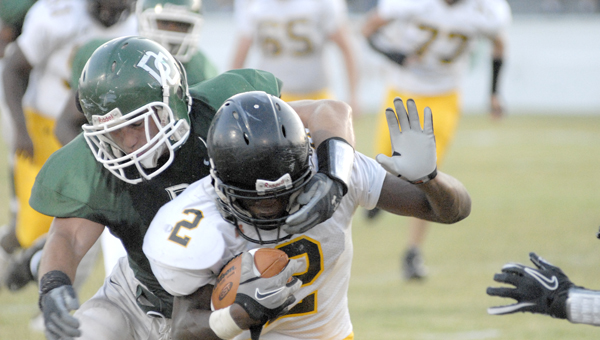 illingsley running back Jimmie Lanier Jr. (2) tries to break free from Dallas County defender Justin Moreland. The Hornets will have to kick their game up a notch to find their first win Friday night. -- Robert Hudson

The Hornets will be at home when they face Jemison High School Friday night at 7 p.m. to open region play for both teams.

Moore said he and his staff have been focused squarely on correcting his team’s mistakes.

“Our focus this week has been more on us than we have on Jemison because we’ve got to learn how to not be so self destructive as far as ball security and things like that,” Moore said. “We fumbled the ball the first three possessions last week and that led to two out of three scores for Billingsley.”

Moore said his team can’t afford to make those same mistakes against a solid Jemison team that’s coming off a 29-13 win over 5A Chilton County High School.

“They’ve got a really, really good, athletic quarterback that can run and throw,” Moore said. “They have an All-State running back that ran for 200 yards last week. They’re going to be tough to handle.”

Moore said Jemison also features a strong defense and will be one of the toughest teams the Hornets face this season.

The Hornets will look to utilize more players on both sides of the ball on Friday.

“We’ve been playing quite a few guys both ways,” Moore said. “This week we’re going to see if we can find as many people as possible who can play both ways.”

One player Moore will look to for big plays on offense come Friday is senior Chris Hunter, who returned a kickoff 85 yards for a touchdown in the fourth quarter of last week’s game.

“Chris will get more offensive snaps this week,” Moore said. “Chris is a very determined football player. It takes more than one guy to take him down and he plays with a lot of heart.”