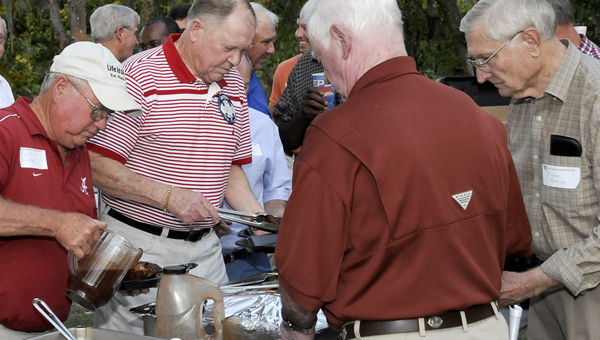 Members of the Selma Quarterback Club enjoy some barbecue during the club’s kickoff event Monday evening at the home of Julius Talton. The club’s first regular meeting at the Morgan Convention Center will be Sept. 12. -- Robert Hudson

With football season underway, the Selma Quarterback Club held it’s own kick off Monday, holding the annual opening event at the riverfront home of Julius Talton.

“The Kick Off is the beginning of the Quarterback Club’s season,” Leonard Ingram, the club’s captain for 2011, said. “We have meetings every other Monday. During the year, we collect a lot of money from sponsors, we collect money for dues, we have raffles and we do a big ticket drawing for $10,000.”

Ingram said the Selma Quarterback Club’s goal is to promote fellowship through football, and to help out young men in the community.

“We do a lot of stuff to raise money, and the money’s given away in the form of scholarships,” Ingram said. “We give four each, $4,000 scholarships. These are people who play football in Dallas County. As long as these people stay in school, every year they’ll get $1,000 for four years. It’s a good organization with good fellowship.”

The Kick Off meeting was highlighted by speakers Jim Dunaway, Lance Taylor, Ryan Brown and Sean “Rockstar” Henniger of WJOX-FM in Birmingham.

The guest speakers hosted a short version of their sports talk radio show “The RoundTable” and took questions from the nearly 150 members in attendance.

This was the second time “The RoundTable” crew hosted its show for the Selma Quarterback Club and Dunaway said it’s always a good time.

“It was fantastic,” Dunaway said. “It’s the beginning of the year and everyone’s optimistic, especially in our state where we’ve had the past two national champions. It’s like a holiday when you come to a quarterback club like this.”

Ingram said the registration fee to join the quarterback club is $175, and the club is open to anyone and everyone.

Ingram said prospective members can register online and see a full list of speakers at www.selmaquarterback.org.

He also added that registration is available throughout the season.

The Dallas County Health Department announced it is banning the use of all tobacco products on its campus, in its... read more