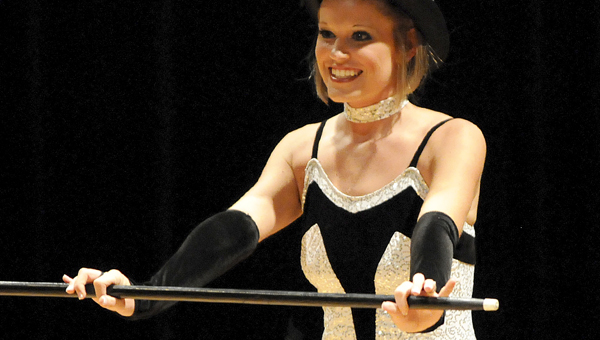 But, it wasn’t until her name was called as the 2012 Distinguished Young Women Dallas County that she appeared shocked.

“I was surprised. Very surprised,” Harris, a senior at Dallas County High School. “I was so nervous on stage when they began calling out the names.”

By being selected as the program’s winner, Harris earned a $3,000 scholarship, in addition to the $1,200 in scholarship money earned from placing in the four other categories.

She now has the distinction of being the first Distinguished Young Women Dallas County winner, as the program recently changed its name from the longtime Junior Miss moniker.

For program coordinator and Selma Civitan Club member Ben Holifield, the participants this year were the reason the event was so successful.

“These were great girls, great talents,” Holifield said. “At times during the practices there was some frustrations, but it all came together. They were all there together, encouraging one another.”

Caitlyn, who is the daughter of Jeffrey and Carol Harris, said she had an advantage coming into this year’s program, having participated as a “Little Sister” during last year’s event.

“I was a Little Sister, so I knew exactly what to expect this year,” Harris said. “The preparation was the most fun part of the process. I loved working with the girls.”

Sponsored by the Selma Civitan Club, the program annually awards more than $10,000 in cash scholarships. The program’s funds are made possible through local business and individual donations. Distinguished Young Women is the oldest and largest national scholarship program for high school girls, awarding more than $63 million in cash and college scholarships in 2010.

Dr. Sid McCollum wishes Mallieve Breeding a happy 90th birthday. McCollum, pastor of First Presbyterian, was one of many who... read more