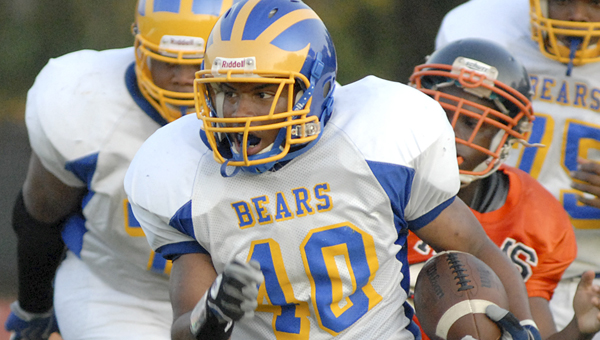 Keith running back Rodney Ellis celebrates after a touchdown run. Ellis carried the load for the Bears in a 40-6 win over Calhoun High School to open the season. -- Fred Guarino

In the animal kingdom a tiger might be too quick for a bear, but in football, the 1A Keith Bears mauled the 2A Calhoun Tigers on the road in Letohatchee Friday night 40-6.

“We started a little bit slow,” Crum said. “On the first drive I usually like to attack and get it done early, and that gives our guys confidence and momentum to score… We finally got to clicking and we looked pretty good. I think we scored on all but two drives. It was good for us to get this win, our first win under our belt.”

The baddest Bear of all was Rodney Ellis, known affectionately by his teammates as “Fred,” who piled up 334 yards on 11 carries and two touchdowns on the night.

“We got out coached. They out executed us,” Williamson said.

“They’ve been running that offense four or five years.”

Also scoring for the Bears in the first half were Walton Young on 9-yard waltz into the end zone standing up at the 7:33 mark of the second quarter and Maurice Crumpton on a run of 15 yards with 2.01 left in the half.

Barnes was good on three of four point after tries to put the Bears up 27-0 at the half.

Barnes got into the touchdown-scoring act himself at the 1:35 mark of the third quarter on an 18-yard run. He tacked on his own point after to put the Bears up 33-0.

Calhoun finally got on the board with a 65-yard pass play from Devel Goldsmith to Jamicheal Jackson at the 14.6 seconds mark of the third quarter to make it a 33-7 ballgame. The point after failed.

Damarquis Lumpkin closed out the scoring on a 13-yard run at the 8:15 mark of the fourth quarter to make the final 40-6.