Hundreds gather to get moving 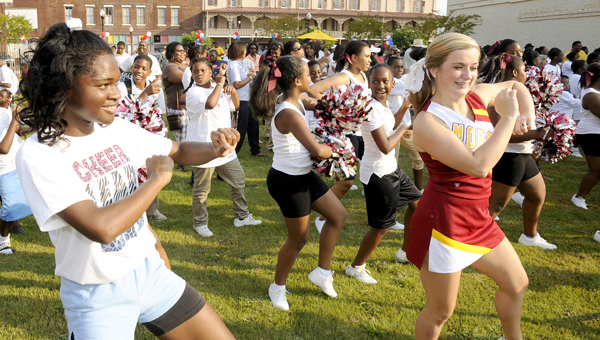 Members of Selma City Council, city officials, area school students and members of the community, gathered to help make Dallas County, one of the most obese counties in the state, a healthier place.

Event chair Jeannie Evans said Alabama is the second most obese state in the nation and her goal is to put an end to that fact.

“We want to raise a healthier generation of children in Alabama,” Evans said. “This is a big kickoff for Selma.”

Selma Pediatrician Dr. Patricia Kendrick-Robinson said obesity is not a racial, ethnic or economic problem, but a universal problem that needs to be tackled by the community.

“When you have three out of 10 children in middle school obese and a 70 percent chance of them continuing to be obese in adulthood, it’s a burden to the community later on,” Kendrick-Robinson said. “The community has to come together as a unit and everyone has to understand exercise is important.”

“We exercise to stay in shape,” School of Discovery student Jhaquoria Washington said. “I will do some exercise every day.”

The event was in conjunction with the unveiling of the Riverfront Park and trail Thursday evening, which many in the community are in favor of.

“I came to support the council and support Mrs. Evans,” Selma City councilmember Greg Bjelke said. “It’s exciting; a good thing and I like it. It (Let’s Move) has a double meaning — exercise and let’s move forward as a community.”

Selma resident Evelyn Cox said she believes the parks are a beautiful addition.

“It’s a diverse crowd, it’s unity and it shows what Selma is and can be,” Cox said. “There’s something you can do here.”

Friends Hiawartha Ford and Renae Smiley have been residents of Selma for more than 30 years. Both women believe the park offers hope for area children.

“It’s something good for the community and it’s what needs to happen on a continual basis,” Smiley said. “It will keep the kids out of trouble and it’s something the city should’ve already done.”