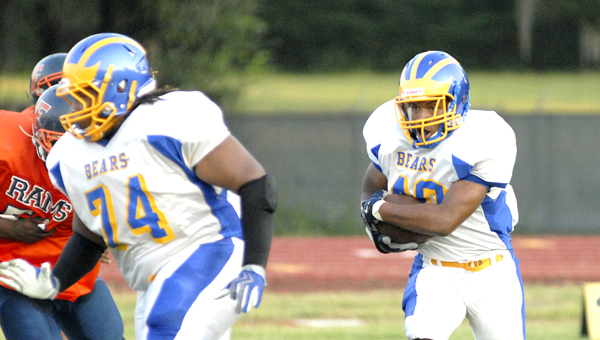 After an impressive showing in last Friday’s jamboree against Selma and Francis Marion high schools, The Keith Bears football team is looking to carry over that momentum to its regular-season-opener.

The Bears will open the season Friday on the road in Letohatchee, as they’ll play the Calhoun Tigers at 7 p.m.

“My outlook is pretty much the same no matter who we’re playing,” Crum said. “We’re going to have to do what we do well, and that’s run the football.”

Crum said his team defeated Calhoun to open last season, and that team featured some fast athletes. Crum will be looking to counteract the Tigers’ speed with a few athletes of his own.

“We’re going to attack them and make them try and stop us from running the football,” Crum said. “We have some backs that have some experience under their belt. Demarquis Lumpkin is entering his third year as a starter. Rodney Ellis ran the ball real well and amassed about 140 yards last week against Selma, a team that in my estimation is no slouch. “

Moore said he would also depend on running backs Terrell Velazquez and Martavius Harris to help carry the load.

“Hopefully we can keep the defense off balance by sharing the ball with all those guys,” Crum said. “All of them have unique running styles. None of them run alike.”

Crum said he does not think his team will be affected by playing on the road, and he’ll have them focused on controlling the football.

“I always tell them to control the football,” Crum said. “Don’t turn the ball over.”