Judson athletes go on a mission 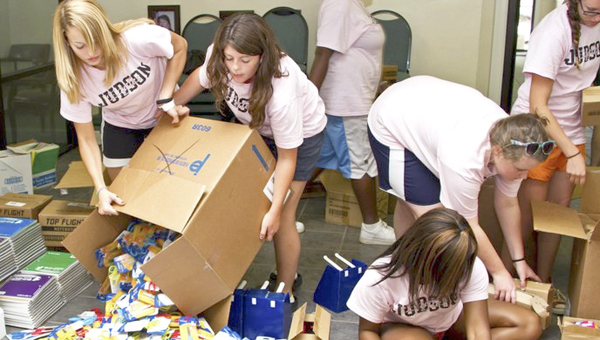 The Judson College soccer team recently completed Mission Week, where they participated in a number of community service projects. Head coach Emanuel Stephens said he was pleased with the team’s enthusiasm as they approached their multiple ventures.

MARION — The Judson College soccer team completed a week where they got off the field and ventured out into the community to help others.

The Judson College Eagles completed their Mission Week where they participated in a number of community service activities around Marion including helping children get ready to go back to school.

“I think it went great,” said Emanuel Stephens, coach of the Judson soccer team. “It went better than I imagined. I think the girls did well with helping out the community.”

Stephens said the local group Sowing Seeds of Hope coordinated the week’s events with the Judson College Service Learning Center. The team handed out school uniforms at Turner Elementary School and gave out school supplies at the wellness center in Marion, which was sponsored by the Perry County Commission. The team also spent time during the week to visit nursing homes in the community.

Stephens said the community service events helped the team bond in ways that will help them once the season begins.

“I think it also bonded the team better than I could imagine,” Stephens said. “Once the season starts, various things could test that unity that we have and I think this week really has helped. I think we’re going to be able to really make it and become a better team and group of people as well.”

The Eagles opens at home on Aug. 23 against Point University at 4 p.m.

By Robert Hudson The Selma Times-Journal The first high school football game of the season hasn’t been played yet, but... read more