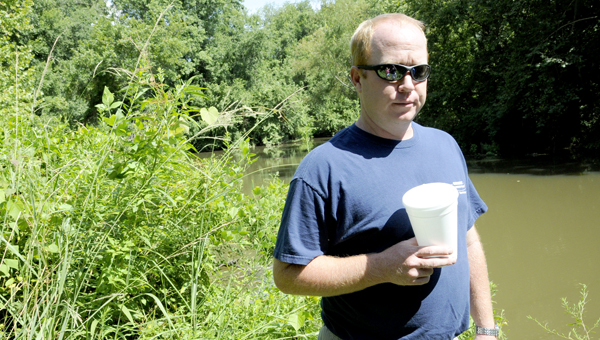 Jamie Thomas is a local hunter who received one of 50 tags to hunt alligators in Dallas and Wilcox counties. -- Tim Reeves

Though deer season is still months away, a number of Dallas County hunters headed out Friday in search of big game.

A summer alligator season for Dallas and Wilcox counties had a number of people taking to the water to try their hand at gator hunting.

Among them, was Selma native Jamie Thomas. Thomas said they put his boat in the water at about 7 p.m. and hunted until 3:15 a.m.

It didn’t take long to see their first alligator.

“We saw the first alligator at about 8 p.m. and saw them constantly,” he said. “We saw about 10 alligators in a five mile stretch.”

Thomas said it also didn’t take long to hook their first alligator. Unfortunately, the hunt ended with nothing in the boat.

“We hooked one twice and got it to the boat and it broke the line,” he said.

Thomas equipped the boat with three rods holding 65-pound test and a 200-pound leader and another rod with pure 200-pound test line.

Rods were used to comply with the rules set forth by the Alabama Department of Natural Resources.

The hunts, Thomas said, offer a different purpose than those on television shows.

“Really, I think it’s more for population control,” he said. “There is a market for hides, but we have been told they are not bringing anything right now.”

Reports from Roland Cooper State Park said 12 of the 50 tags handed out were turned in with alligators Saturday morning.

All tagged alligators are required to be taken to Roland Cooper State Park so the tags can be collected.

According to the Alabama Department of Conservation and Natural Resources, this is Alabama’s sixth regulated alligator hunting season.

The Department said hunters “will be allowed to choose which location they would like to hunt. The other spot(s) not chosen will be filled from a list of alternates.”

Though his first hunt did not produce an alligator, Thomas said it was an educational experience.

“We learned a lot about what you can and can’t do,” he said.

It won’t be long before buses will be lining the streets and area children will be loading them for Dallas... read more