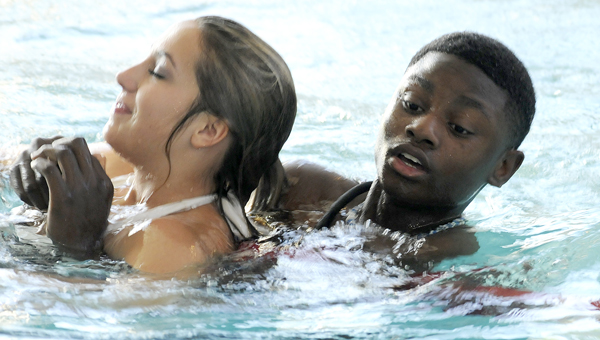 A group of young men and women are being trained to ensure it’s still fun to play at the YMCA.

The YMCA of Selma-Dallas County’s lifeguard training class is aiming to teach a new group of lifeguards to keep the pool safe.

“I scheduled this class because all my lifeguards who’ve been working here over the summer are going back off to college,” said Teal Cabe, aquatics coordinator of the YMCA. “I had to have some new lifeguards for the Fall, so I got in touch with Cory Horton to teach the class.”

Cabe said Horton, who is also the pastor at Elkdale Baptist Church, has his Lifeguard Training Instructor (LGI) certification with the American Red Cross.

Cabe said he needed some new lifeguards in order for the pool to stay open at its normal hours.

“What we really needed help with was morning shifts,” Cabe said. “We finally got it all set up and got enough people in the class, so I’ve got enough lifeguards so we can keep the pool open like it’s supposed to be.”

Cabe also said Horton has taught lifeguard classes at the YMCA before.

Horton said the students in this class will be certified as a lifeguard with the American Red Cross for the next three years and their CPR training will be valid for the next two years. Horton taught the class a number of life-saving techniques.

“We taught them how to get people out of the water safely, how to look for illnesses and how to prevent problems,” Horton said. “The biggest job of a lifeguard is preventing problems.”

Horton said the class learned to treat injuries like cuts and bruises, CPR, how to use a deliberator and how to rescue people from the surface and under water.

The class also learned what to do in case someone has suffered a head or neck injury in the water.

Lindsay Reynolds, one of Horton’s students in the class, said she’s learned some valuable information.

“I learned how to rescue people and save lives,” Reynolds said. “It’s useful information because you can save a life if someone’s in danger.”

Another student, John Major, said he’s also learned a lot from the class.

Timothy Moorer, another student in the class, said the information learned in the class will be useful.

“It’ll help me save lives,” Moorer said. “If there’s a sticky situation and someone needs help it’ll come in handy.”

Sgt. Anthony Lumpkin, from Selma, was one member of the 900th Maintenance Company from Brundidge, which returned Friday from their... read more