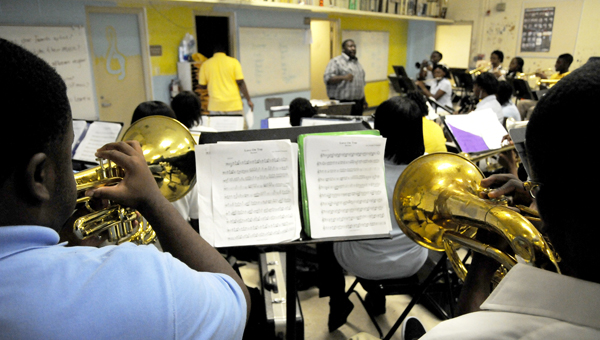 Playing each note with skill and perfect pitch, members of the Selma High Marching Saints adjoin their brass and woodwinds in a harmonious sound that permeates the band room. The Selma High band has worked long and hard to make sure this football season is like no other.

With a two-week summer band camp already in the books and after school practices being held in preparation for the school’s first game on Aug. 26, band director Brandon Williams has high expectations and believes the fans won’t be disappointed.

“They (the crowd) should see a more family-oriented show, hopefully we’ll have more crowd participation,” Williams said. “We’ll have different formations, more features with our flags, majorettes and dance. I’m sure the dance line is going to surprise everyone this year.”

With a band of 92 members and a different support staff, Williams, who’s been with Selma for eight years, expects this season to go a little differently than years past.

“It’s kind of level this year,” Williams said. “I have more dependable people in place which makes it a whole lot easier, I don’t have to worry. Students are enjoying it a whole lot more, the band is a lot more unified and together … the whole aura of the program has changed. All around, they (the crowd) should see a whole different Selma High.”

“I make sure everything is on point and where it needs to be,” Ray said. “We try to out work everybody and work hard for every game.”

Ray said he enjoys the adrenaline rush he feels right before the start of each game and halftime show.

“Just hearing the crowd cheer before you go out on the field … I love the band,” the senior said, emphatically touching the whistle dropping from his neck. “The night before the game is the crankiest nights of all. At school we’re in the band room playing songs and dancing, everyone is hyped. We think about how we’ll look before the game.”

And though the arduous practices may seem too much for some, Ray said he enjoyed them. Pleased with the results of his other drum majors, Ray said he is looking forward to the first game of the season.

“Practice really helped,” Ray said. “We run everyday, learn how to play and march … it helped us get ready. I want to have a complete good season, the same as we had last year and the year before. This is my last year, so we got to go out with a bang.”

Williams said his overall goals are to get more parents and the community involved and teach his students the value of hard work.

“They (the students) spend more hours here than at home,” Williams said. “It’s not just about music but hard work and dedication pays off.”

Meadowview Christian’s Devante Morrer bursts through the line during a Thursday practice. Moorer and the Trojans will open the season... read more