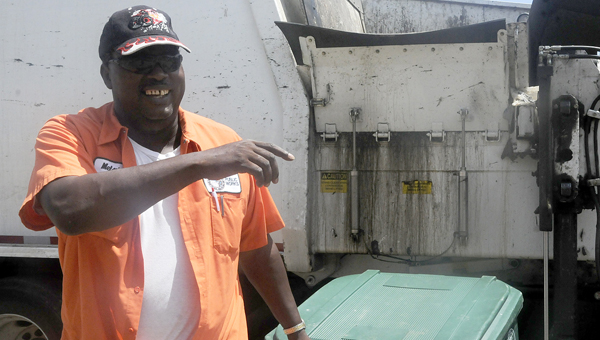 “It’s just you and the truck and your radio,” Selma garbage collector Melvin Johnson said. It’s hip hop that keeps Johnson company as he runs his collection route through the city every morning. Hip hop, and about 550 cans worth of household garbage.

Johnson is one of two Selma garbage collectors with Selma Public Works, and he’s been doing the job for 22 years.

“I already had a daytime job,” Johnson said. At 28-years-old, Johnson was the cook at Alabama Criminal Justice in the afternoons and evenings. “I was living right there by the shop, and I noticed that the guy would come in at 5 (a.m.), and along about 10:30 or 11 o’clock, he’d go on home.”

Johnson said he went to then Selma Mayor Joe T. Smitherman to ask for the job. Now, he pulls long hours working both jobs.

Johnson collects about 13 tons of garbage per day, using the hydraulic truck — and arm shoots out at the press of a button, grabs to plastic green can, empties the contents into the truck and set the can back down.

He said the smell isn’t a problem.

“I’m sitting in the air conditioning just going by, picking it up. And I got some air freshener in the truck,” Johnson said.

“I’m a morning person, and I like to get up that time of morning,” Johnson said. He said he couldn’t sleep late now, even if he wanted to, because he’s gotten so used to the schedule — but he does catch up on the weekends.

“You see a bunch of stuff happening in the morning time, especially when you’re in the residential areas,” Johnson said. “You’ve got some people who forgot to put the can out — they hear the truck, and whatever they got on, they run out there to bring the can. They say, ‘Sir, I’m sorry, but I didn’t want you to get away from this house.’”

Johnson tries to go above and beyond in his job, taking the time to personally pick up bags that are left on the sidewalk, or fall out of the can.

“You want to do the job right,” Johnson said. “Bags on the ground, that doesn’t look good … Why not take the time to get out and throw the bag in the can? It isn’t going take you five minutes.”

Of course, this dedication isn’t always appreciated. Johnson said he deals with many different situations when it comes to people on his route — like when one customer filled her can too full.

“I hit it, and when I hit it, two of the bags fell,” Johnson said. “So I’m getting out, fixing to get it, and she comes out, cussing.”

Johnson runs into problems with people overfilling the cans, placing them next to the street facing the wrong direction, and blaming him for not picking up their garbage when they forget to bring the can to the road. But he said all in all, it’s ‘smooth sailing.’

The sweeping landscape of the Black Belt is one of the area’s most alluring features, but it has proven to... read more