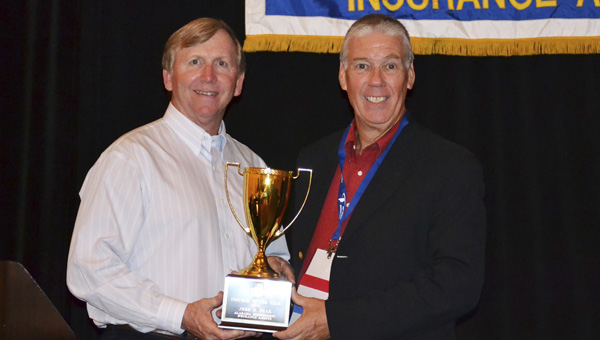 Jere Peak of The Morris Agency of Selma was recently named the AIIA Insurer of the Year at the 115th Annual Convention and Trade Show in Sandestin, Miramar Beach, Fla.

Former AIIA president Bill Sager, who presented Peak with the reward, said Peak is a valuable member of the association.

“His dedication to the agency system and his willingness to be involved has made our association a stronger organization,” Sager said.

“It is an honor to count him as a fellow agent and good friend.”

The AIIA is the state’s largest and oldest association dedicated to the property and casualty independent agency system.

It names the Insurer of the Year as the agent it believes exhibits outstanding moral character, community service, leadership within the association and service, and dedication to the independent agency system and the industry.

Peak is currently the head of The Morris Agency’s property and casualty division.

Peak served as AIIA president in 1993 and is one of the youngest members in the association’s history to be elected to AIIA executive committee chairs.

“He was, and is still, well respected by the others he served with,” Sager said.

“His advice and guidance was valuable to the executive committee as we worked to conduct the business of our association.”

Part of the reason the AIIA named Peak Insurer of the Year is due to his community service efforts.

Peak began his career in the insurance industry when he joined the Montgomery-based Gulf Agency in 1977.

Peak joined The Morris Agency in 1981 and has worked there for the past 30 years.

Dallas County Health Department’s Ashvin Parikh, a native of India, has made his home in Selma for 35 years and... read more