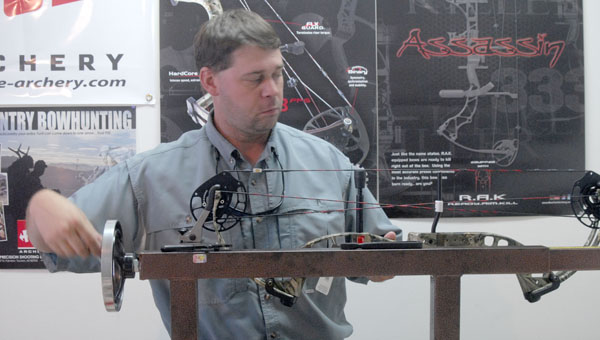 Though bow season is still three months away, Rountree Outdoors owner Chet Chappelle said it is never too early to begin planning and practicing.

The deer hunting bow and arrow season officially begins Oct. 15, and Chappelle said those who hit the field with their bows have a tremendous advantage over traditional rifle hunters.

“It gives you that extra month,,” he said. “It gives you a chance to scout and get a better idea of where the deer are going to be. There is also a lot less pressure on them during the opening of bow season.”

The season, Chappelle said, includes both bows and crossbows now. Both become hot sellers around the end of July and the start of August.

Many people might see crossbows as an expensive hobby to take up, but Chappelle said a hunter can be completely outfitted for about $299. This includes a red dot scope, arrows and a quiver.

Many people prefer bow hunting because it is more of a challenge.

“You have to have the wind right and you have to be close to the food source,” Chappelle said.

It is also important to disguise scent. Chappelle said he sells a number of products including Dead Down Wind, Tink’s Vanish and Primos XB designed to make a hunter invisible as far as odor is concerned.

Perhaps the most important aspect of bow hunting, Chappelle said, is preparation and practice. It all begins, Chappelle said, with getting measured for a bow in regards to the length of the draw and poundage.  The draw, Chappelle said, does not have to be overwhelming to be effective.

“A lot of people get discouraged because they can’t draw a 70 pound bow,” he said. “You don’t have to do that to kill a deer. A lot of people set their draw at around 60 pounds.”

A proper release, Chappelle said, is also important. The release allows the hunter to fire the arrow much more accurately than with fingers.

The final piece of the puzzle, Chappelle said, is the target. Some people prefer to use box-shaped targets, while others use a lifelike 3-D target.

Before preparing to shoot, Chappelle said it is also important to look over the bow to see if it needs maintenance. He said the store can service and adjust bows that need new strings or tune-ups of any kind.