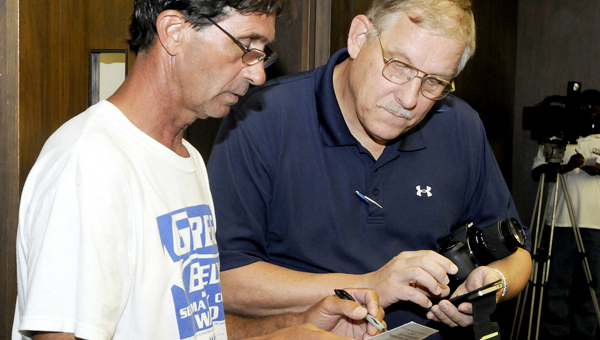 The results of Tuesday’s special election to fill an open position on the Selma City Council may be a few days from being official, but it is very clear who the voters of Selma’s Ward 3 supported.

With nearly 68 percent of the vote in his favor, Greg Bjelke will replace Dr. Monica Newton, who resigned in January, vacating her remaining term.

“I want to thank all of the voters who came out today. It started out hot and it was drizzling rain,” Bjelke said. “It was such a humbling experience to see all of the people making the extra effort to come out.”

For Greg’s opponent, Gwen Brown, she found “peace” in the results and the effort she and her supporters put forth in the campaign.

“I’m at peace,” Brown said. “The people that showed up made the decision, and you just accept that.”

Even though Brown said she is comfortable with the results, she did have some disappointments with some alleged actions.

“We’ve had some formal complaints made — written complaints made — about improprieties, you know, voter fraud situations,” Brown said. “And that’s hard, because people have a right to exercise their vote and their voice the way they want to.”

Bjelke’s vote totals surpassed Brown in each of the three ballot boxes Tuesday. In the absentee vote, Bjelke earned 169 votes to Brown’s 63.

The biggest turnout came at the polling place at the Christian Outreach Alliance, where 377 votes were cast. In this box alone, Bjelke earned more votes than Brown earned overall.

As for the polling place at the Dallas County Courthouse, which primarily serves the residents in Ward 3’s Riverview District, only 169 votes were cast, with Bjelke earning 91 votes and Brown receiving the other 78 votes.

Although the results must now be canvassed and authorized by city and election officials and approved by the Selma City Council Tuesday, July 12 at a noon meeting, Bjelke is already looking forward to getting to work.

When Bjelke’s election is made official, his first meeting will mark the first meeting where each of the city’s eight wards will be fully represented on the Selma City Council.

“I’m delighted that we now have a full council again,” Selma City Council president Cecil Williamson said. “I’m delighted that Greg Bjelke has won this seat, and I’m sure that he will represent all the areas of that ward fairly and equally.”

Selma Mayor George Evans said the conclusion of the election gives Selma’s most historic districts full-time representation on the council.

“I just feel that now Ward 3 has a representative that they can talk to concerning their needs, even though they could have talked to other members of the council or the mayor about different things,” Evans said. “Now they have their individual representation to give their concerns and idea.
“I think it’s good that this part is over and that we can move on to the business of the city.”

What’s next for Brown?

While Bjelke prepares to take the Ward 3 post on the Selma City Council, Brown said she will now turn her efforts back to her community projects.

“It’s who I am; it’s what I’ve done,” Brown said. “I have a lot of energy to redirect … I know that I need to consider what is the next direction for me.”

One such direction, Brown said, is increasing efforts by her and the Freedom Foundation and work on the restoration of the Teppers Building in downtown Selma.

“It really is something that has strengthened in my heart, to work on funding for the Teppers Building … and do the community work and support the theater group that is growing and touring,” Brown said.

And what about running for public office in the future? Brown said that is a calling she has not received yet.

“My faith is a really big deal to me,” Brown said. “I really prayed about it, and I felt like God put it on my heart to run, and I really feel like I need to get back to Him and let him show me what the path would be.

“It’d be really easy to get wrapped up in either direction: to be like, ‘I am never doing that again’ or ‘Oh, I’m going for it.’ And I don’t want it to be like that. I want to know what is the right thing by God for me.”

A poll worker at the Dallas County Courthouse places an "I voted" sticker on Francis Dean Driskell after he completed... read more