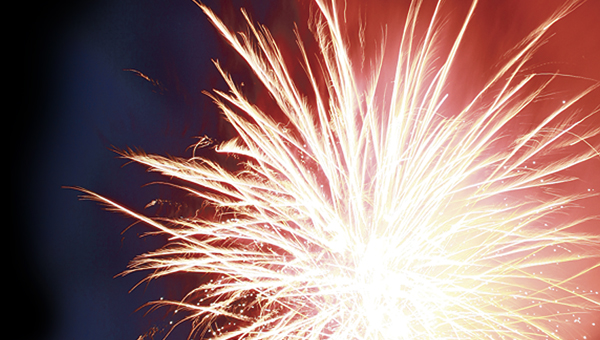 Fireworks will once again light up the sky this Fourth of July at Bloch Park. -- Special photo

Independence Day will end with a bang at Bloch Park with a fireworks extravaganza.

“It’s an opportunity for the community to come out and — you know, unity throughout the entire community,” Selma-Dallas County Chamber of Commerce executive director Sheryl Smedley said. “It’s a good family outing. It’s a celebration honoring our United States of America.”

Probate Judge Kim Ballard said even though there has not been a fireworks display for the past few years, he expects a good turnout.

“In the past we have actually had groups from surrounding counties to come visit,” said Ballard, noting that cars would be backed up for miles. “I don’t know what it is about a fireworks display and a parade, but people come out to see those things.”

Mayor George Evans also said he thinks there will be a great turnout.

“Everybody enjoyed it when we did do it there,” Evans said. “We’re making it a Selma Dallas County family program and firework show.”

Smedley said the event will also be a time to honor those who have made freedom possible, and each branch of the military will be honored.

The theme of the event will be “America: Past, Present and Future.”

“Pyro Productions is going to be doing — it’s going to be a computerized sky show,” Smedley said. Music will be played in conjunction with the fireworks that will fit the movement of the display.

The night’s events will include involvement from the fire and police departments as well as local churches and schools, and is sponsored by the city of Selma, the Dallas County Commission and the chamber of commerce.

“It’s not a just a city function. It’s a cooperative function,” Ballard said. “It’s kind of a show of unity.”

Evans said although plans are not yet finalized, they hope to have concessions available.

Gates will open at 5:30 p.m. as an open house for people to see the new construction, and the free program is set to begin at 7 p.m.

WCCS’ free “Ready-To-Work” program is every Monday through Thursday from 8:30 a.m. until noon inside the school’s former bookstore. It... read more