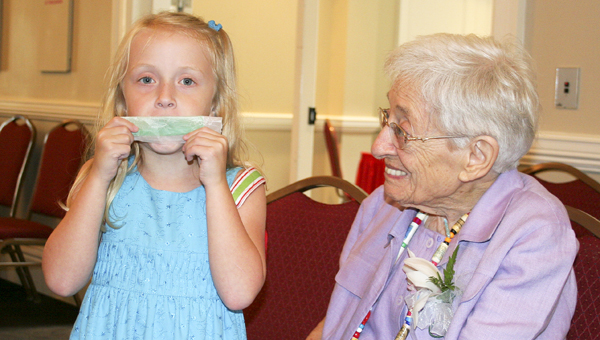 Kathryn Tucker Windham offers a lesson in “blowing combs” to Jordan Jones of Livingston, during Windham’s induction into the Black Belt Hall of Fame on the campus of the University of West Alabama. The induction took place in January. -- Special photo

After news spread of the death of Kathryn Tucker Windham, a storytelling pioneer and groundbreaking journalist who touched many lives, many of Windham’s colleagues and lifelong admirers expressed their heartfelt appreciation for the icon Monday.

“I don’t know how to begin to put into words what she meant to the Black Belt region,” said director of Black Belt Treasures Sulynn Creswell. “She was just someone who always supported the work we’ve done and the people we’ve represented. She was our No. 1 fan — always willing to come down for storytelling or book signings. She put her life into this, and she encouraged all people to take what they had around them and treasure it.”

“The festival was centered around storytelling in hopes crowds of people would be entertained through the art, but the real reason for the event, I think, is that the stories would spark a memory in each person creating a story to be shared with friends and family,” Johnson said. “She never met a stranger and could tell you the simplest stories and have you enthralled in every word. Let’s honor her memory by telling someone you love a story or two.”

Windham’s on air segments for the National Public Radio’s “All Things Considered” program in the mid 1980s, sparked interest in many, even for then line producer Art Silverman.

“She was on there quite a bit and, my being from New Jersey, she charmed me with the world of Alabama and its rich history,” Silverman said. “I found her to be a surprising woman — talking about concrete, beautiful things and then ghosts and the unexplained. With storytelling, she took her time, and I learned the pauses and paces she took were just as important as her words. She was deeply a part of Alabama and she showed the essence of who she was in her stories.”

“There’s nobody like her on the Alabama scene,” Williams said. “She was a pioneer in a lot of ways as a journalist and storyteller — helping to popularize the genre of storytelling and remaining one of the most popular on the national circuit. She wrote nearly 30 books, including cookbooks and ghost stories, and she ranks as our best seller as an Alabama author.

“She wrote about the history of the state and culture, and she bridged together the Old and the New South,” Williams said. “She loved the people of the state and saw Alabama for what it was and not through rose-colored glasses.  She was a wonderful human being and her books will be cherished by future generations.”

Windham also had a long relationship with the Alabama State Council on the Arts.

“We mourn the passing of a great Alabama artist, one of the iconic artists of our state for more than 50 years,” executive director Al Head said. “She was a great storyteller and photographer — one of our great ambassadors. She travelled to festivals all over the country, representing her home state of Alabama. She has been the focal point of many grants awarded by the Council related to storytelling and to projects that feature Alabama writers and literature. She was one of the great ones, and her passing is a real loss.”

Jeanie Thompson, executive director of the Alabama Writers Forum, recalled Windham’s simple stories that touched her life as a writer.

“My favorite story of her was when she told of how she played with lima beans on her front porch and made animals out of them,” Thompson said. “She helped us to remember a time and place before technology and to appreciate things and the world around us. Kathryn was funny but true in all she wrote. She was just a good person — teaching us to reach out to one another.”

Windham’s wisdom, Thompson said, is what writers will miss most.

“I would always look to her for the wisdom she’d impart,” Thompson said. “Her major literary contributions are vast to the whole state, yet simple. She should be known as an amazing writer; she showed a picture of Alabama that many of us may not see everyday. How she viewed the world translated into her writing, and I want to be like her.”

Norton Dill, who produced the documentary, “Kathryn: the Story of a Teller,” in 2005, knew Windham for more than 12 years.

He fell in love with her straightforward character and immediately knew he had to work with her.

“I started out trying to make a film about Southern storytellers and she was the first one I talked to about the project,” Dill said.  “I sat down and talked with her and didn’t realize what a fascinating, totally genuine person she was. She’s unlike anyone I’ve known. She didn’t pull any punches — always telling you exactly what she was thinking. Her honesty is hard to find.

“Her love for people and her fascination with them is what impacted me the most about her,” Dill said. “She had a total understanding of what is important in life. She was a bridge between blacks and whites, especially during the civil rights movement, and she will continue to be, even beyond death — which is inspiring.”

Windham a pioneer on many levels