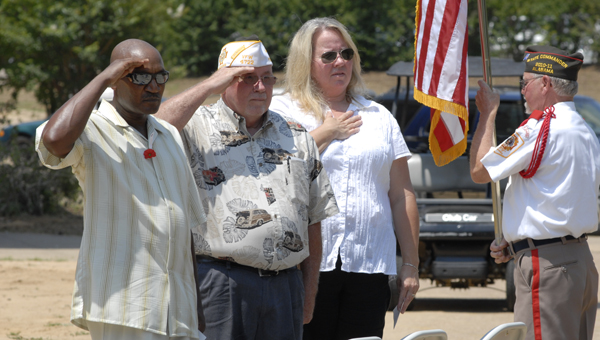 Veterans and residents salute during the playing of Taps at Monday’s Memorial Day ceremonies at Memorial Stadium in Selma. The event was organized by the Veterans of Foreign Wars Post 3016. -- Tim Reeves

Mid-summer temperatures did little to deter veterans, residents and area officials from turning out to Monday’s Memorial Day ceremonies at Memorial Stadium.

More than 100 spectators turned out to the morning event, sponsored by the Veterans of Foreign War Post 3016, to honor the ultimate sacrifice paid by those who fought and died in America’s wars.

“Today is a real special day. It is a day for us to pay tribute to those who have fallen that we might have the chance to meet like this and carry on their name and to render a salute to them,” VFW Post 3016 commander Rayburn Hill.

According to usmemorialday.org, Memorial Day was officially proclaimed on May 5, 1868 by General John Logan, national commander of the Grand Army of the Republic, and was first observed on May 30, 1868 when flowers were placed on the graves of Union and Confederate soldiers at Arlington National Cemetery.

It is the sacrifice and dedication to country that highlighted the presentation offered by Selma Chief of Police William T. Riley, the guest speaker at the event.

“There is no greater honor than to serve one’s God, one’s country and one’s community,” Riley said. “We must not forget the sacrifices that went on then, go on now and will happen in the future.”

Riley said ceremonies such as the one Monday are important as they continue to educate the dedication shown by veterans and honors those who had fallen.

“I personally feel that a lot of Americans don’t understand the sacrifice that happened at the beginning of this country, that has made this country what it is today,” said Riley, who is a disabled veteran himself, having served in the U.S. Navy. “It was honor — truly and honor — for me to come here and be here with all of our veterans.”

Valedictorians hope to give back