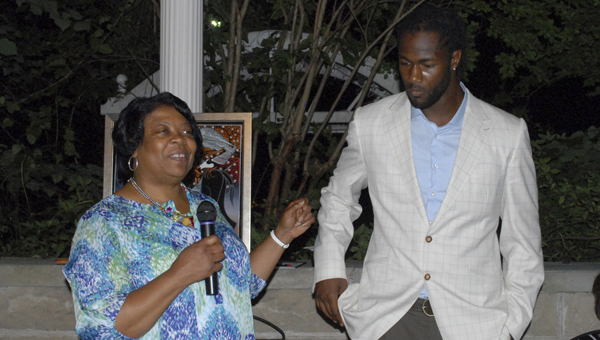 It was a star-studded event at this year’s MJ93 Fundraiser event held Friday evening at Brownstone Manor.

Sam Johnson, Michael’s dad, said the event has continued to be an annual success.

“You get the opportunity to see people come together and give back to the community,” Sam said. “Michael’s always had a heart to give and help others.”

Michael’s mother, Thomasene, has planned Friday’s fundraiser for months. She said Friday’s gala was evidence that people from Selma can be a success.

“This event was truly a success, and I was happy to see all of the guys come out and help with Sunday’s camp —it’s been awesome,” Thomasene said. “The community has just been wonderful. The children will not be disappointed.”

“If your mind can believe it, you can achieve it,” Sewell said. “We all stand on the shoulders of giants and we’re so appreciative of the sacrifices made for us so that we could be who we are. It’s so encouraging to give to this charity.”

Michael, happy to be in Selma once again, acknowledged some of his athletic friends and teammates who were happy to support his efforts. Michael spoke of the importance of mentors and changing Selma through the heart. “You never know what you may say to someone or do that will drive that person,” Michael said.

“I’m proud to be from Selma and one day it will be my home. I want to make it everything it can be.”