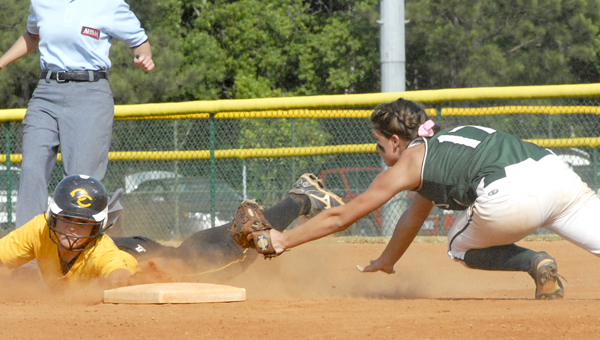 With two outs and a 3-1 count in the top of the eighth inning, Kendall Veach launched a ball over the left-centerfield wall to lift Dallas County to a 5-3 win over Cherokee County High School in route to their first state title in school history.

“I was just wanting a hit,” Veach said. “God gave me that hit and put that ball over the wall, so all praise goes to him. It feels really good, we worked hard all season for this. We prayed four times before the game. We never gave up and fought the whole time.”

The launch gave the Lady Hornets the breathing room it needed and when the ball hit Veach’s mitt after yet another strikeout victim for Cassie Daniels, the celebration was on.

“There is no words to describe it,” Lady Hornet senior and tournament MVP Ciera Ingram said. “We busted our butts this year. God was just so good to us, we couldn’t have done it without him. We had a great group of seniors and such a great team.”

Daniels, too, had yet to have the feeling sink in.

“I think I may start screaming at, like, ten o’clock tonight,” she said. “Right now I just can’t believe it.”

The moment may have never happened, however, if it wasn’t for a brave coaching move and solid defense in the bottom of the seventh inning.

After runner’s for the Lady Warriors reached second and third base with no outs, Dallas County head coach Ed Miller called timeout and told his team to intentionally walk the next batter. It was a move so rare for the team, Miller said he called a timeout to explain.
“I felt like in that situation it was the right move,” said Miller. “We just loaded the bases and threw fastballs, but when those are moving at 60-61, it’s hard to hit.”

The Lady Warriors struck first in the bottom of the first on an unearned run by Kaitlyn Griffith.

It took the Lady Hornets a couple of innings strike back, but finally, in the top of the fourth inning, they did.

Ingram led the inning with a walk and Amy Persinger singled to put runners on first and second with two outs.

Avery Mott then singled to score Seleigh Denny, who was pinch running for Ingram. Whitney Denson then drove Persinger around with a single of her own and Veach drove in Mott before the inning ended.

The Lady Warriors battled back in the fifth inning when Griffith hit a 2-run homerun of her own following a lead off walk. The two teams battled, until the eighth, when Veach finally capped off the Lady Hornets season empatically.

“It’s deserved,” Miller said of his girls. “In 10 years coaching this is the best team I have ever had. We had one goal at the beginning of the season, a state championship. Now we have it.”

Whitney Denson celebrates with teammates after a 9-3 win over Haleyville. -- Chris Wasson MONTGOMERY — It took an inning... read more