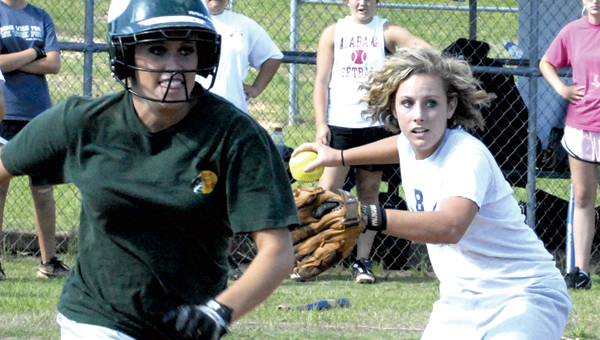 That’s all that is left for the Dallas County Lady Hornets.

Just one more chance to iron out the wrinkles before heading to Montgomery’s Lagoon Park in a quest for the AHSAA class AAAA state championship on Thursday.

“I think by the end of the day tomorrow we will be ready,” Lady Hornets head coach Ed Miller said.

“We are going to come out here and work our butts off one more time.”

The team spent a majority of Tuesday’s practice working on bunt coverages, trying to get everything together in case another team’s strategy to get past Lady Hornet ace Cassie Daniels is just to put the ball in play.

“That’s what (Dadeville High School) did during the championship game,” Miller said. “They tried to swing for about three innings and after that, they just gave up swinging because they couldn’t hit her. I think we will see a lot of that this week.”

The rest of the time Tuesday was spent on something the team is quite familiar with, hitting.

Dallas County has been able to put its fair share of runs across the board and hope they can continue their hard-hitting during the title run.

Miller said the key to winning, though, would be to maintain the high level of defensive play that has kept the Lady Hornets in so many games this year.
“These girls do an awesome job out there in the field,” Miller said. “I have been coaching for a long time and this is probably one of the best defensive teams I’ve had. If we can just keep that going, I think we give ourselves a good chance.”

Dallas County will start the tournament against Haleyville at 10:30 a.m. Thursday at Lagoon.

“We just have to keep playing like we have been,” Miller said. “I know these girls can do it.”