Track teams tune up for championships 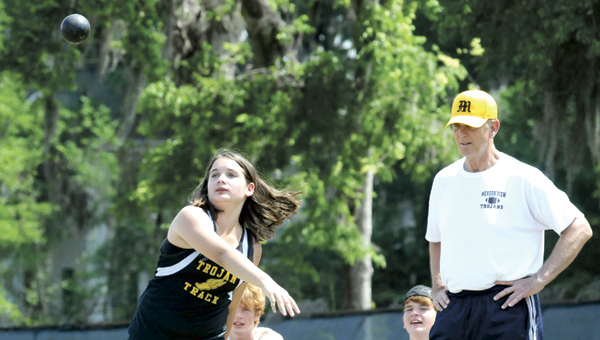 Meadowview Christian School’s Jess Oglesvy throws her first shotput as her track coach John Glasscock looks on Monday at Memorial Stadium. Meadoview Christian was one of more than 20 AISA schools to participate in the meet. -- Chris Wasson

The Alabama Independent School Association held its second event in as many weeks at Memorial Stadium Monday and things went much smoother according to Morgan track coach Rob Robinson.

Last week, teams came in for the first meet and the events ran a little longer than what was hoped.

This week, new rules were added to shorten the time of the meet to approval.

“It’s been going much faster,” Robinson said. “We ran the 3200 meter race during the field events and have eliminated a number of the competitors to make things go faster.”

Teams with more than two competitors in the races were asked to pay for extra teams to discourage bringing as many people according to Robinson.

“It has helped us keep things moving,” said Robinson. “Today has gone pretty well so far and we expect it to get even better.”

More than 20 teams showed up to the meet as schools begin the final preparations for next week’s AISA state track meet that will also be at Memorial Stadium.

“We are just getting ready,” Robinson said. “We have had girls that have never run events qualify and that helps because, the more you have competing, the better chances you have of winning.”