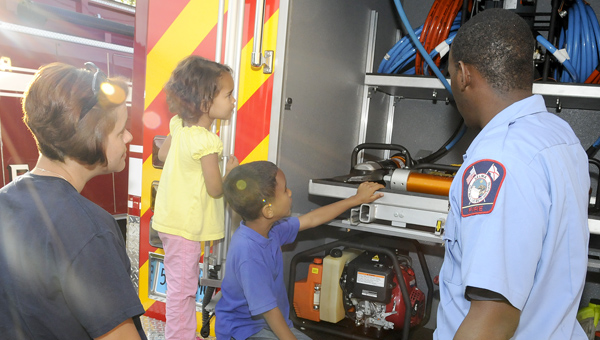 Devin, 5, and Lily Holmes, 4, get a chance to climb on one of the city’s fire trucks under the watchful eye of their mother, Leimomi, and firefighter Terrence Venter. -- Tim Reeves

Dozens of Selma residents took advantage of the city of Selma’s open house Thursday evening, giving them total access to many of the city’s department heads, equipment and programs used to serve residents.

“This is very important to me and to the city that we do this each year,” Selma Mayor George Evans said, while viewing the many displays, kiosks and equipment on display inside and outside the Carl C. Morgan Convention Center.

“As long as I am mayor, we will make it a point to put on one of these open houses each year,” Evans said. “It is important that residents have the opportunity to meet the people working for them and use some of the equipment we have to serve them.”

Each of the city’s departments were on hand for the open house including the parks and recreation department, Selma Fire and Rescue and the Selma City Police Department. Residents also had the chance to view a scale model of what the completed riverfront amphitheater will look like once completed.

Some of the equipment on display, especially those used by the public works department, was purchased thanks to the October 2009 bond issue.

“We have some of the equipment the bond issue allowed us to purchase for our departments here,” Evans said. “Sometimes people may not know exactly what the money went towards.”