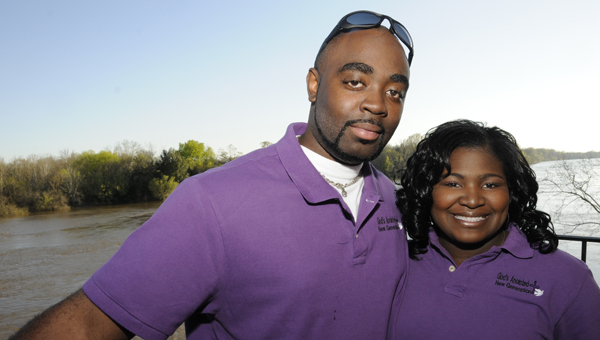 Elijah and Willetta Dunning are bringing a positive spin to the word gang. The couple formed the group God’s Annointed New Generation to share the word of God with other believers. -- Tim Reeves

For some, the word “gang” may bring a negative connotation but for one young couple, it’s positive.

Newlyweds Elijah and Willetta Dunning created the Christian organization GANG or “God’s Anointed New Generation” in December to promote kingdom building by teaching and sharing the word of God through fellowship with other believers.

WIlletta and her husband desire to help the lost.

“There’s a lot of violence here,” Willetta said. “We just want to reach out.”

The Dunnings, who have made Selma their home, have a heart for the community and desire to bring people — young and old, single or married, to Christ.

“Me and my wife grew up in traditional churches,” Elijah said. “We would attend services every week and still come out the same way, nothing was different. We just want to minister to people and reach the youth; let them know there are alternatives to violence.”

Elijah, 26, accepted the tug on his heart to ministry back in November. A month later, Elijah said, God told him to start a gang.

“We felt like God wanted us to be set a part from other ministries and break away from tradition,” Elijah said. “We want to be in God’s will.”

Currently the organization has 15 leaders with four spiritual advisors. GANG has partnered with other ministries and organizations in Montgomery, Birmingham, White Hall, Georgia, Florida, Ohio and Maryland.

The couple said there are many people who are hurting and desire to talk, but don’t feel comfortable doing so; they want to offer an outlet without being judgmental.

“We introduce people to some of our gang leaders or direct them to different pastors if they don’t have a church home,” Elijah said. “Those people can choose from a list of topics they’re comfortable in discussing, with the specific leaders.”

“It helps to save souls,” Allen said. “It gives young people, especially young men, a chance to join a godly gang instead of a deadly one.”

Elijah and his wife desire not only to change lives locally through their organization but also on a national level as well.

“We want everyone to be on one accord and see the presence of the Lord saturate their lives,” Elijah said. “The Lord lived and died for everyone and we want all to experience God’s mercy and power.”

GANG will have its second meeting of the year today at 6 p.m. at Mt. Zion Christian Church in White Hall. For more information email the couple at Godsanointednewgeneration@yahoo.com or call 505-6800 or 354-1143.

A heated discussion between board members and the crowd, over the board-approved recommendation for $230,000 in school repairs for Clark... read more